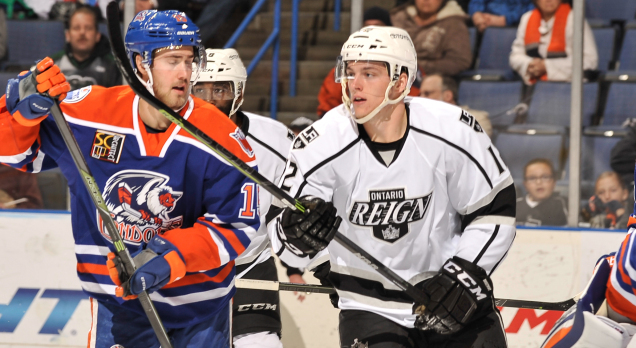 Reign head coach Mike Stothers, on overall thoughts of the weekend:
It was a tough weekend. Two really good teams we played against. We got three out of four and I know when we talked last night, I know answers were short, so we’ll elaborate on that today. That was the focus after the first one. Get three out of four and it makes it a pretty good weekend for us. It’s a good way to go into the break. We’ve had to battle hard to find ways to get points, find ways to get pucks behind the opposition’s goalie and we’re hoping that these close games, these tight games, these pressure games will pay off for us in the second half.

Stothers, on the lack of flow:
I wonder what brought that on? [Reporter: The penalties, is it a referee thing, a discipline thing on the players?] First of all, you can’t blame every single penalty we took on the referees. That’s just asinine to even think that. Some of them they clearly deserved. I guess, man, it’s hard to be politically correct in these situations but you know what … [Reporter: Don’t be] You want to pay my fine? [Reporter: Actually not, no thank you] There’s a little holiday going on around here, I could use a few extra bucks here, I’ve got my daughter here and everything else. I’m not going to give money to the league. It’s a development league, for us and for the officials. I guess I’ll cut them some slack and just leave it as that.

Stothers, on Lowry’s first goal:
I was just happy to see anybody score. I mean, holy smokes. But it was great. He was going to the net, he had his stick on the ice. Going to the net hard, I think that’s part of what he brings to the team. It’s been so hard for him to kind of get into a groove. He’s missed so much hockey because of his injury. The season starts and all he can do is practice and not really participate in physical drills. Twenty games into it or whatever, now he’s trying to get caught up. It’s hard. It’s frustrating for him. But he’s worked hard and as we were for Brodz and everybody else that’s scored their first goal, we were excited for him. It’s your first pro goal. It’s special.

Stothers, on if this was Lowry’s best game and moving players in the lineup:
He was good, but I thought he was real good last Sunday. I thought he was real good. I’ve liked him. Again, it’s another one of those situations that just because a guy doesn’t play it’s not because I’m dissatisfied or unhappy. Unless you’re Horvat. He learned. But then everybody else took penalties. So now I’ve got to sit out everybody for San Diego so we’re holding open auditions for anybody that wants to play. Guys are in, guys are out. It’s part of the process for them too. They’re doing a good job.

Stothers, on the third period and the flow with the Dowd, Brodzinski, Auger line:
I think the fact that it was 5 on 5. We didn’t experience much of that tonight. You’re trying to get through it without exhausting your guys and hoping there’s something left in the tank. I thought it was a good, better game considering last night for that line. They needed to come back with a better performance and they did.

Stothers, on the weekend and the two OT games:
When you analyze the whole weekend I’m pretty happy about the whole thing. I don’t think the players thought I was very warm and fuzzy this morning when I came in and I probably wasn’t last night. But it was more about the fact that we go into overtime last night and we didn’t get any shots. How do you expect you’re gonna win if you don’t shoot the puck? So tonight that was the theme. Shoot the puck. Backs goes down, as a good veteran with a great shot, does what he’s supposed to do and helps us out and gets us a win.

Stothers, on the play of Nic Dowd on the PK:
Dowder pretty much does just about everything for us. And he was a guy that really needed to step up his game today, and he did. And that’s exactly what I would expect out of a guy like Dowder, a veteran player now. He’s a veteran and he’s wearing a letter on our team, represents leadership. That’s more of the way, in tune to the way that Dowder can help and contribute to our team. [Reporter: How vital was it for him to have a rebound game today?] We won’t know will we?

Stothers, on Ebert’s play on Lowry’s goal:
Ebs has got a pretty good ability to get up the ice and join the attack. He drove wide and we’re asking guys to go to the net hard. We work at it in practice about having your stick on the ice and redirecting slap-passes-type of situations. You need somebody to step up and make a play and that was a huge moment for us. It was part of I think Ebs’ growth for us as a defenseman. Last year he was in and out of the lineup, we had a little bit of a rotation. This year he’s been out a couple times but he’s making some progress in his focus and his attention to the little details to make himself a more consistent, more reliable player, without losing the strengths that he has and that’s getting up the ice and making plays.

Sean Backman, on his game-winner:
Good defensive play by Vinny down there in our own zone, he was skating up the ice and kind of shoveled a pass up to me and I just let it go off the wing. [Reporter: Did you see anything?] Just trying to get it on net. Not a lot of chances tonight and last night we didn’t have any shots in overtime and Stutts made an emphasis on getting the puck to the net in overtime so that’s basically what that was.

Backman, on what was said between the second and third periods:
We were down pretty much the whole game. Killing penalties takes a lot out of a team, but sometimes on the other hand you can feed off your kill and if your kill’s doing well, you can feed off that energy. We just said, ‘we have 20 minutes, 20 minutes left and then we have Christmas break so just leave it out there and see what happens.’

Backman, on Lowry’s first goal:
That’s great. Anytime you see a guy get his first pro goal. I can still remember mine. Lows works hard and that was a great play by Ebs and good finish by him. So, congratulations to him.

Backman, on how tough it is to get offense going with all the penalties:
I think it works in both ways. It takes a little life out of you because you’re killing and you’re in your own zone, but on the other hand, if you’re killing penalties and frustrating their power play, you can feed off it like that. I think it was kind of back and forth with the amount of penalties we had tonight, but that’s the way some games go. [Reporter: Did you guys get that lift from your penalty kill?] I think so. Our kill’s been pretty good all year and we killed aggressively so I think when guys are skating and moving and trying to frustrate their power play it helps us a little bit.

Joel Lowry, on his first goal:
The goal was just a great play by Ebs. I was just driving the dot lane hoping for a pass on the far pad and he kind of beat his guy and found me on the far side. Didn’t have to really do too much, just put it in the empty net. Was a good play by him and I’m happy to finish it off.

Lowry, on his back injury and his journey in his first pro year:
It’s been a while since I’ve scored and it feels good to help the team. It’s tough when you’re not out there playing too many games and then it’s nice to get back in there and do something positive for the boys. [Reporter: Where’s that puck right now and where’s it going to go?] I don’t know where the puck is so I don’t know where it will go but definitely happy about it.

Lowry, on the work he’s doing to keep himself mentally prepared:
You’ve just got to focus on little things. I’m going to be really good on the wall tonight, something like that, just focus on the small details and make sure you’re doing all the little details right because then when you do the details right everything else will come. So, I think that’s the biggest thing.

Lowry, on if he thought it was his best AHL game:
I think I played a little better tonight. I also think I played better than I had been against San Jose last weekend so I finally think I’m getting my feet under me and feeling a little more comfortable out there so hopefully I keep playing well.

Jonny Brodzinski, on his line with Auger and Dowd:
Yesterday I felt we had a really good game too. I think coach wanted to flip it up to get Lows a bunch of shifts. That was good for him, he got his first one too which is awesome. Really boosted, I think every line, I think that goal.

Brodzinski, on his role on that line:
Just be a shooter. Just be open at all times. I’m a power forward and so get the puck out of the corner, get it to the defense, go to the net.

Brodzinski, on keeping the focus in a penalty-filled game:
It’s tough too for all the guys that aren’t on the penalty kill too to stay into the game. There was probably 8 minutes in that third period (thinking he meant 2nd period) where it was just over and over and guys weren’t on the ice and it was the same guys going over and over. Tough to stay in the game when you take that many penalties but we found a way.

Brodzinski, on going into holiday break this way:
It’s nice, especially after yesterday’s shootout loss. It was a bitter one for sure and it wasn’t a game where we thought we played our best at so it was nice to come out today – we obviously took a lot of penalties but I thought we played pretty well.

Dowd, on the penalties:
It was tough. Obviously brought some of that on ourselves. Obviously they have a pretty good power play and they showed it. I think our power play’s obviously got to be better but felt good to get the win after a tough game.

Dowd, on rebounding after last night’s game:
It was good. I think personally it felt a lot better than last night did. That was pretty miserable. I think as a team last night, obviously I think it was a great bounceback and it showed a lot about our team and how we’re going to react when stuff like that happens. I thought we played well and it was good to get the win before break.