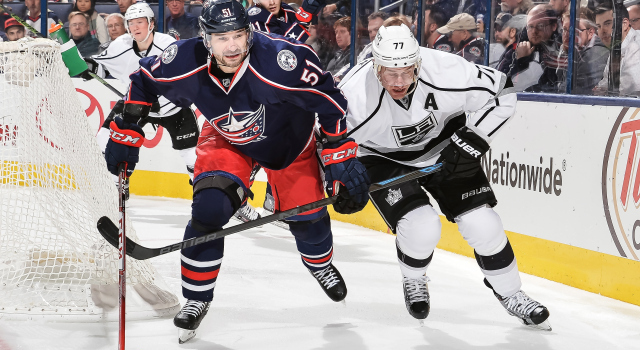 There is a schedule imbalance across the NHL, and while each team plays 41 games at home and 41 on the road, teams in the Western Conference will play five in-division teams five times and one in-division team four times while playing out-of-division but in-conference teams three times. There simply isn’t an playing field across the league when it comes to a home-and-road balance.

But over enough time, it would be thought that teams will face opponents that are both high on their recent performances and opponents who are looking to perhaps nurture their scoring, or refine their compete level, or receive better goaltending.

Not so on this current trip.

When Los Angeles faces the Toronto Maple Leafs tonight at the Air Canada Centre (4:00 PT / FOX Sports West / KABC 790 / I Heart Radio), they will face the fourth consecutive opponent coming off a loss. Buffalo had recently returned from an O-fer Western Canada swing. Ottawa had been called out by its head coach after allowing 27 first period shots in the game that followed. And, speaking of the Canadiens team that had turned the first period into a shooting gallery against the Senators, they had lost five of six entering their game against the Kings and had two nights prior lost to a Sharks team that had an even .500 points percentage at the time.

Even the two opponents on this trip that were not coming off losses, Columbus and Pittsburgh, weren’t exactly on stable ground. The Blue Jackets, though they had come off a complete effort in a win at Philadelphia in their prior outing, had already replaced their coach. The Penguins would do the same on the morning after the Kings left town.

If there’s any team that has been trending upward in advance of their match-up against Los Angeles, it’s probably Toronto, which despite goaltending concerns, has points in 11 of its last 16 games and has established the basis of a strong work ethic under Mike Babcock, according to Darryl Sutter.

“I know the way it works. It reminds me of when I went to San Jose, very same,” Sutter said. “They started the year here, what, 1-7-2? So, everybody’s going, ‘Oh, gee.’ Now in their last 20 they’re 9-6-5 and then in their last four, they’ve scored what, 14 goals? It’s going in the right direction, and it’s not just the influence of one person. I know that from being in that situation, too. It’s got to do with veteran leadership in your locker room, and organization.”

Of course, Sutter would also likely say that the Kings have to play a desperate game to more often than not collect two points in a league marked by immense parity. What did the Kings have to say about this feature in the schedule against teams with something to prove?

Christian Ehrhoff, on the degree to which the team is aware of their opponents’ trajectory:
Yeah, we’ve got pretty extensive video from the coaches before every game. Personally, as a player, you can’t follow every team in depth, and that’s why we get that review before every game.

Ehrhoff, on whether it’s easy to sense variation in opponents’ emotion over 82 games:
Yeah, definitely. A lot of teams are desperate, and what this league has brought, it’s a very competitive league. A lot of teams have high expectations, and not everybody can be where they want to be, and that’s why there’s a lot of desperation. Us, too, we’ve got a decent record right now, but we want to still win this game tonight and finish this road trip off on a good note and make it a great road trip.

Dustin Brown, on facing opponents on the trip with something to prove:
Quite honestly, we don’t pay attention to their schedule, who they played the previous game. I mean, we definitely know the results, just based on scouting and stuff like that. I think, again, the positive of our group is we’re just focused on ourselves. … We’re not concerned with what’s going on elsewhere. We know the position we’re in, and if we can continue to gather points, we’re going to separate ourselves.

Brown, on the dangers of facing a team lower in the standings:
I think fortunately there’s a big chunk of this group that was a bad team together, and you learn a lot when you’re a bad team or a losing team and you become a winning team. I think that kind of helps us in these types of situations. Like I said, this group’s been together for a long time, and before we were a good team, we weren’t very good. You understand both sides of it and just try to use that information. But, again, I think as a group we’re just focusing on separating ourselves as much as we can in our division.

Brown, on coming off a win in which the Kings allowed 45 shots on goal:
It’s just about finding different ways to win, really, and there’s a reason we have Quickie in goal. He’s a good goalie, the best I’ve ever played with. That’s why you have goalies, so when you have games where maybe youre not on top of it defensively, he’s had a solid game for us and we found a way to win games. We know what makes us successful as a group, and if you look at where we are in shots against and shots for, most of the games are the other way around. It’s just details.

Brown, on the mental toughness of playing a heavy portion of road games:
That’s part of it. I think we’re a very comfortable group on the road. Historically, I think we’ve been a good road team, so it’s just getting your mindset ready before each and every game and also being able to hit the rest button when you lose a game.