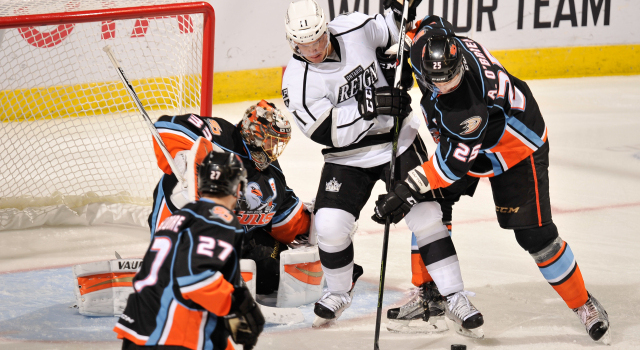 Reign game breakdown
The Reign scored with 26 seconds remaining in regulation but eventually fell in a shootout 3-2 to visiting rival San Diego (14-10-0-1) on Saturday night. In a battle of the top two teams in the Pacific Division and, of course, a battle between the Kings and Ducks affiliates, the Reign (15-4-2-1) lost in their first shootout attempt of the season, as Mike Sgarbossa beat Peter Budaj in the third round to end it. Nick Ritchie scored San Diego’s two regulation goals, which held up until Kris Newbury’s tally late in the third. Justin Auger had the other Ontario goal, his fifth of the season. The Reign were without Michael Mersch (still up with Kings) and Adrian Kempe (with Sweden prepping for upcoming World Junior Championships) in a defeat that snapped their four-game winning streak.

Best quote
Kris Newbury, on the Gulls’ Brian McGrattan: We don’t like each other. I don’t like anyone on that team, so just leave it at that.

Three stars
–Kris Newbury – The veteran centerman was playing in his fifth game since returning from a broken foot that forced him to miss 12 games. He had one goal in those first four games of his return, but his game-tying tally with 26 seconds left in regulation was his biggest yet this season. Newbury banked a Jonny Brodzinski rebound off the back of Gulls goalie Anton Khudobin while positioned behind the net for the equalizer. Newbury centered what was consistently the Reign’s best line of the night with Sean Backman and new linemate Valentin Zykov.

–Anton Khudobin – The Gulls goalie stopped 27 shots, went toe-to-toe with the Reign’s Peter Budaj all night, and stuffed all three Ontario shooters in the skills competition (misses by Backman and Newbury) for the win. The Reign either outshot or broke even after each regulation period (12-8 ONT in first, 8-8 tie in second, 7-1 ONT in third), so he had plenty of work on the second night of a back-to-back after defeating San Jose on Friday. The back-to-back games marked his first two with the Gulls since clearing waivers and being sent down by the Ducks earlier this week (he went 3-3-0-1 with Anaheim). On Saturday, Khubodin was the Gulls’ top penalty killer and staved off multiple threats from the Zykov-Newbury-Backman line as the Reign finished 0-for-6 on the man advantage.
–Nick Ritchie – The Ducks’ first pick at 10th overall in the 2014 draft really looked like he doesn’t belong in the AHL. Ritchie netted two goals, the first in the opening period after a Brandon Montour shot went off the boards behind Budaj and right to the 20-year-old winger at the side of the net. Ritchie’s second goal came off an uncharacteristic turnover by Reign center Nic Dowd. Ritchie’s initial chance off the turnover was denied by Budaj, but the Reign were caught out of position and Ritchie made them pay on his third attempt during the cluster, lifting a high shot past a flailing Budaj. Ritchie has played in 11 games with Anaheim this season, most recently on Dec. 6, and the goal-scorer certainly shined on AHL ice in Ontario.

Turning point
–Newbury’s savvy play to throw the puck off Khudobin’s back with 26 seconds set the Reign up for overtime. It was the second time in as many games that they tied to score in the waning moments with Budaj pulled (see 2-1 OT win over San Jose last Sunday) and Newbury’s play salvaged the point against a tough opponent.

Stat fact
–0 – Fights in the rivalry game, a surprise considering the last three meetings contained a combined five fights along with one call for persisting a fight. By Reign-Gulls standards, this one was quite tame and the linesmen kept any after-the-whistle antics under control.

This and that off-ice
It was Teddy Bear Toss night at Citizens Business Bank Arena so after Auger’s goal in the first period both teams exited the ice early and the remaining 3:32 on the clock was played after a fresh Zamboni cut and before the start of the second period.

Next up
The Reign host the Bakersfield Condors on Sunday afternoon at 3 p.m. in what will be their last game before heading into a five-day holiday break (no practice, no games) next week.