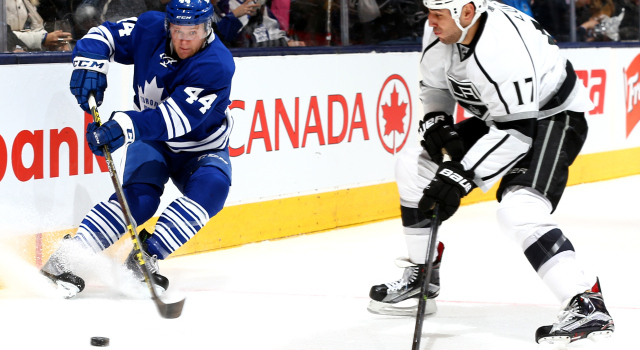 Dustin Brown, on if fatigue played a factor in tonight’s loss:
We get enough rest. It’s a long trip, every team has long trips. We weren’t sharp.

Brown, on what allowed Toronto to take control of the game:
I don’t think we were making it hard enough on Bernie, he saw a lot of the pucks coming in. We didn’t get in on the forecheck well enough tonight, we had a lot of dump-ins and then come and backcheck, so when we’re on our game that doesn’t happen.

Brown, on his immediate reaction to the Kings’ 3-2-1 trip:
We’ve just got to get back home. We have one more game before our break, it’s a divisional game and those have a little extra weight on them, we’ve got to keep trying to separate ourselves from the team we’re playing next game.

Brown, on Jonathan Bernier’s play:
I thought he played well, he didn’t really have too many difficult saves, he saw a lot of the pucks. I mean Bernie’s a good goalie, if he’s going to be able to see the puck he’s going to stop them.

Brown, on what happened to the team during the third period:
They got one halfway through, I think. We had a really good chance going one way and then they come back down and score and it’s 3-0. The other two goals were kind of goals we normally don’t give up, so just sometimes that’s how it goes, game got out of reach real quick for us.

Milan Lucic, on Jonathan Bernier’s performance:
You hear him talking in interviews lately, he was talking about how he was feeling like he was getting better and better, and eventually it was going to come for him, and it seemed like everything we put on net hit him, and you know he was in the right spot and played a really good game. I think if we get one past him with the chances that we had, it would’ve been a different result, but it’s just one of those games where it didn’t go in for us and things went in for them.

Lucic, on if the Leafs are noticeably different under Mike Babcock:
It’s hard to tell, only because Detroit was in our division the last two years with Boston, so it was definitely, it felt like you were playing the Wings and their system, so it’s definitely a different system than what they’ve played in the past, and obviously, with another new coach for them, it takes time to adjust, but obviously he’s had some great success in the league, and that’s what his goal is to do here, is to have some success.

Lucic, on if he found the Leafs tough to play against:
Pretty good team. They capitalized on their chances tonight, they have some good skilled players that are having some pretty good years, and they had good nights tonight.

Lucic, on how he evaluates the Kings’ road trip:
Pretty good, I think. What was it, 3-2-1? So you are one point above .500, so I guess it is a successful trip, but at the end of the day, if we get the win tonight, it ends up being a really good trip, so unfortunately we were unable to make it a really good trip. I think the two days in Mont Tremblant was really good for the team as far as getting together and kind of create that bonding, so there’s a lot of good to take out of it.