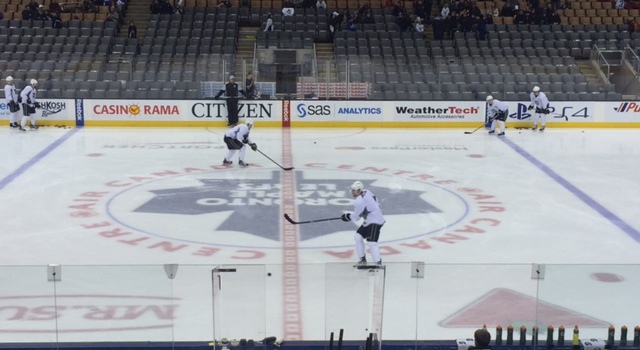 Good morning afternoon from the team hotel, where the Kings are now holed up after an optional morning skate. Trevor Lewis didn’t linger on the ice for extra work, so expect him to be activated this afternoon and draw into tonight’s game. Yesterday’s lines and pairings (Lucic-Kopitar-Gaborik, Pearson-Carter-Toffoli, Mersch-Lewis-Brown, Andreoff-Shore-Nolan; McNabb-Doughty, Muzzin-Martinez, Ehrhoff-McBain) should hold up for the road trip finale. Jonathan Quick was the first goalie off the ice and is expected to draw the start.

Interestingly, tonight’s game will mark the fourth consecutive game that Los Angeles will face a team coming off a loss, and while Columbus and Pittsburgh had won prior to facing the Kings, neither team was feeling particularly high on its own game at the time (and the Penguins fired Mike Johnston the morning after their shootout loss on December 11).

“Quite honestly, we don’t pay attention to their schedule, who they played the previous game,” Dustin Brown said. “I mean, we definitely know the results, just based on scouting and stuff like that. I think, again, the positive of our group is we’re just focused on ourselves. … We’re not concerned with what’s going on elsewhere. We know the position we’re in, and if we can continue to gather points, we’re going to separate ourselves.”

The big story in recent days around these parts is that Jonathan Bernier, who is winless in 11 games this season, will take over the reins once again for the Maple Leafs because James Reimer and Garret Sparks are both out due to injury. 21-year-old Antoine Bibeau, who has 45 games of AHL experience with the Toronto Marlies, will back Bernier up, while Ray Emery will join Toronto’s AHL team on a PTO after getting into three games this season with the Ontario Reign. The Leafs also shook up their lines this morning and are expected to align thusly:

Maple Leafs assistant coach Jim Hiller, who followed Mike Babcock from Detroit to Toronto, is a former King who was involved in the big shakeup in 1993 in which he was sent to the Red Wings with Paul Coffey and Sylvain Couturier for Jimmy Carson, Gary Shuchuk and Marc Potvin.

Forward Warren Rychel lives in an apartment with Coffey and Hiller in Manhattan Beach, and he answered the phone when General Manager Nick Beverley called at 7 a.m. “The way they were passing the phone around, I thought I was next,” Rychel said.

Coffey said: “I knew Nick Beverley wasn’t calling at 7 in the morning to ask me to go to breakfast.” 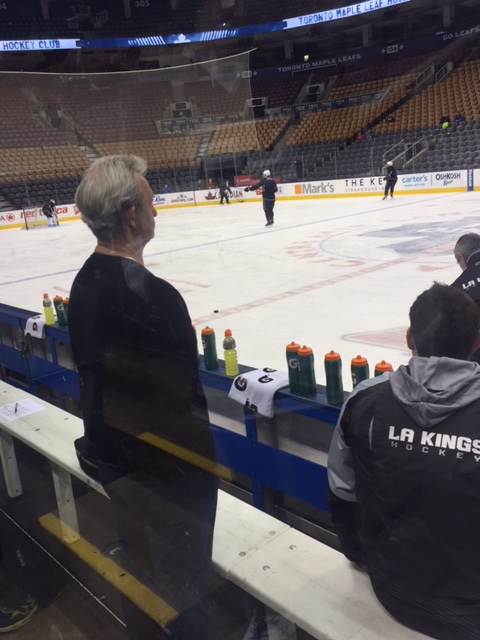