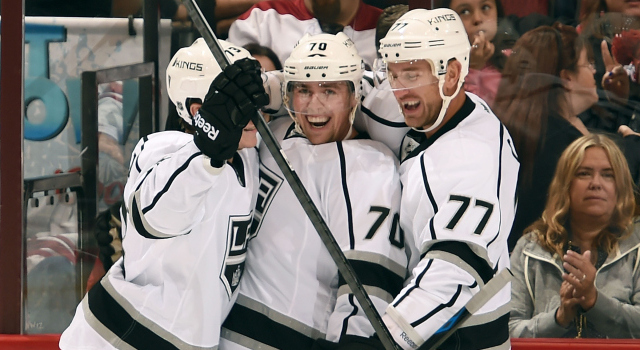 While the Los Angeles Kings incorporated Trevor Lewis into their lines at practice on Thursday with the indication that he could be activated in advance of Saturday’s road trip finale in Toronto, the Kings continued to shuffle their forward lines around, with Milan Lucic remaining up top alongside Anze Kopitar and Marian Gaborik, and Tanner Pearson reuniting with fellow “That 70’s Line” teammates Jeff Carter and Tyler Toffoli.

Lewis centered Michael Mersch and Dustin Brown, while Nick Shore was flanked by Andy Andreoff and Jordan Nolan. But the real impetus for the reunification of Pearson, Carter and Toffoli – a line that had been highly effective in the 2014 Stanley Cup run and carried the team early in the 2014-15 season – could be that the team is looking to continue to stoke production out of Pearson, who has four goals in 31 games after totaling 15 goals in his first 67 regular season NHL games from 2013-15.

“Hopefully we can have the chemistry that we’ve had before and get things going again,” he said after today’s practice.

The line played intermittently through the first three games of the season, prior to Milan Lucic’s movement alongside Carter and Toffoli in mid-October, so there’s not really enough data from this season to suggest how they could perform together. Pearson has played roughly 29 minutes of five-on-five hockey this season alongside Carter without a goal having been scored in either direction, and has played roughly 26 minutes of five-on-five hockey alongside Toffoli, accounting for one goal for and no goals against.

That, of course, is different from his production in 42 games last season before he was felled by a broken ankle. Alongside Carter, the Kings’ on-ice rate read 3.70 goals for and 1.09 goals against per 60 minutes. Alongside Toffoli, the on-ice goals for and goals-against rate per 60 minutes was 4.02 and 2.02.

As always, alignments aren’t permanent, and will change many, many times through the course of the season.

“We moved all our left wingers around last night,” Darryl Sutter said. “A lot of it’s depending on again, when you’re on these trips, you’re trying to not let guys slip through the cracks in terms of their performances, first off, and second off, who your opponent is and how you match up. We played a team last night that they’re four-line deep. In fact, their fourth line took a lot of D-zone faceoffs … so if you did it based on that, Kopi, Gaborik and Lucic were out a lot against the [Torrey] Mitchell line, things like that, and we’re fine with all that, but then you’ve got to be able to move the other guys around. We got into a shorter bench again last night, and I don’t like that. We’ve got guys that flat out have to be better players.”

Tanner Pearson, on the impetus behind moving alongside Jeff Carter and Tyler Toffoli:
I think obviously getting Lewie back is nice, too. I don’t really know the lines or what Darryl’s [looking for], obviously. I just play on the lines that I get put on, and hopefully it creates stuff.

Pearson, on playing with Carter:
He’s a very vocal guy. He was really good to me right from the get-go being in the league, and especially in that playoff run, and obviously the three of us clicked, and last year at the beginning of the year we clicked again. Hopefully we can do that. Obviously, him being a very fast guy, you’ve got to keep up with him. … Just get on the puck, and he’ll do his thing, too.

Pearson, on playing with a right-handed center:
I think that’s the biggest thing. I’ve said over and over again, playing with whoever, going from Kopi to Shoresy to Carts, and passes on Kopi’s backhand versus on Carts’ forehand, I think our systems are all the same, Our centermen play the same way, but it’s just different passing from forehand to backhand. That’s all.

Jeff Carter, on whether Milan Lucic and Pearson provide different looks on the left side:
Pretty similar players. There’s not much difference in their games. They both get in and they both work and make plays.

Carter, on whether the line builds success off forechecking:
I don’t know if it’s just off forechecking. I think we did a good job of it, but there are a lot of ways that we create offense.

Carter, on indications that the line is working well together:
Skating, we play well, and started to create opportunities. It’s what we did last year and we’re doing it well this year.

Carter, on any different feeling of not having to fight for a playoff spot:
No, not really. We’re all pretty even-keel guys and don’t get too high or too low. It’s pretty much status quo around here.

Carter, on establishing distance in a battle for a playoff spot:
Well, that’s your mindset every year going into the season, right? You don’t want to be grinding it out at the need of the year. We’re obviously happy with where we’re at, but I don’t think there’s any different mindset really right now.