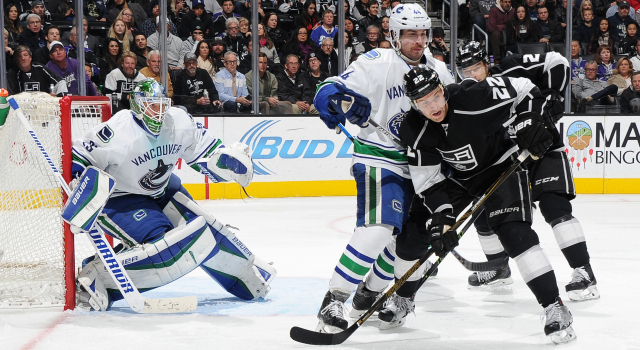 Trevor Lewis took the ice with the Kings at the morning skate at the Bell Centre, but whether he plays against the Canadiens tonight isn’t immediately clear.

“I’ll talk to Darryl and see what he wants me to do, but I’m feeling better,” said Lewis, who has missed the last six games with an upper-body injury and remains on injured reserve. “It felt good to finally get some battle work out there and see how it really felt, and it felt really good.”

That he joined the team with two games and three days remaining on a six-game, 13-day road trip would be an indication that he’d be available for Darryl Sutter’s selection at some point, but it might not be against Montreal (4:30 p.m. PT / FOX Sports West / KABC 790 / I Heart Radio). During line rushes, he skated alongside Michael Mersch and Tyler Toffoli, though that was likely to keep the center spot warm for Jeff Carter, who didn’t skate this morning. Lewis remained on the ice for extra work with Jordan Weal and Derek Forbort, and because Los Angeles is carrying 21 active players – 22 if Lewis is activated – only one of the three is likely to play tonight.

Lewis last played in the 2-1 overtime win over Vancouver on December 1, and referenced “wear-and-tear” as the origin of his injury, rather than any one significant incident. Lewis, who logged 15:14 of ice time against the Canucks, has the reputation of being someone willing and able to play through pain and discomfort. That he was sidelined for six games suggests that it was more than typical “maintenance” that kept him out of the lineup.

“Just a little banged up, needed a little bit of time,” he said. “…It’s feeling better and better every day, so hopefully we can get through it and [I can] play some games here.”

The team’s road trip concludes Saturday night in Toronto. In 24 games this season, Lewis has totaled two goals and four points while averaging 15:18 of ice time.

Trevor Lewis, on being back with the team:
I’m feeling a lot better, just kind of banged up there. I’ve been skating for about five days now back at Toyota with Nelson Emerson, and it’s feeling better and better every day, so it was good to get back out here and skate with the guys and see everybody again.

Lewis, on whether he was watching the games at home:
Yeah, I got the games on my TV so I watch from home every game.

Lewis, on his impressions of the team’s play:
I thought we’ve been playing well, especially the start of the road trip, I think the other night there they scored on the few chances they had and the second period was tough, but overall I think we’ve been playing pretty good and having a good road trip, so hopefully we can end it off right.

Lewis, on whether his goal is to play tonight or Saturday:
I don’t know, like I said I’ve got to talk to Darryl and see what he wants me to do, but hopefully at least get in one of the two games.