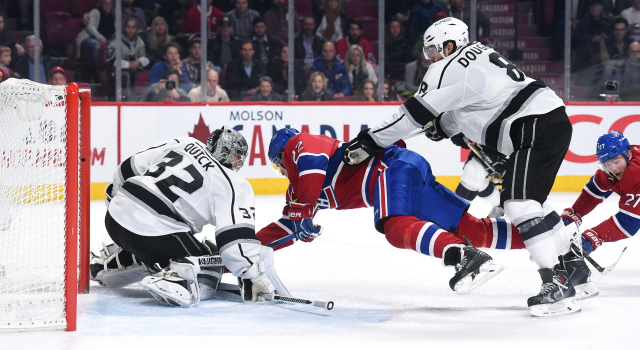 Drew Doughty, on whether the team was determined to prevent a three-game skid:
One of our team’s focuses this year is definitely after maybe a six-game winning streak or something like that, we’re not going to step off the gas pedal. But when we come into a building after a couple losses, you don’t want to play us. … We want to be able to be a team that people are scared to play after we’ve lost just because we don’t like losing games. So that’s one thing we’ve really focused on this year. So far, it’s been so-so, but we can get better at it.

Doughty, on whether their trip to Mont Tremblant was beneficial for the team:
I think so. Whenever you can get those team bonding moments, they’re so important. When you’re at home, a lot of guys have families and what not and we’re not able to all get together and kind of do things that are fun for the team. Being able to do that and just hang out, yeah we had a ton of fun and we were ready for this game at the same time. It’s a big win and I think that has a lot to do with, why we won.

Doughty, on his goal and his assist on Anze Kopitar’s goal:
The first one, just a good power play shot with a good screen by Merschy in front. And then on the second one, [I] just saw a big seam and saw Kopi going backdoor and if you give Kopi those passes, they usually go in.

Doughty, on whether Jonathan Quick was more eager to win after losing in Ottawa:
Oh definitely. Quickie is one of the most competitive guys on our team. I think if I was going to say anyone is as close to competitive as me, it’s going to be Quickie. And we have battles no matter what it is, cards, anything. Obviously he wasn’t happy about letting in four or five goals in Ottawa there. He was going to come back with a strong game and that’s kind of our team mentality is, after having a letdown game we need to come back even stronger.

Dustin Brown, on whether they were more focused on winning after the loss in Ottawa:
Yeah, after getting one point out of a possible four in the last two. I think from the group that was here last year, we learned a lot about not letting a one-game or two-game turn into a four or five-game because that’s what ultimately kept us out of the playoffs. I thought tonight, Quickie was obviously a huge part of it. But I think overall, we had guys willing to do the little things that make a big difference. It’s a work in progress. It’s continuing to do that and stringing together, but that should be the attitude around here.

Brown, on how the withstood being out-shot 10-1 in the beginning of the third period:
It has been part of our M.O., I guess, is being able to sustain pressure and, like I said, Quickie was huge for us tonight. We obviously don’t want to start the third period like that, but we found a way, whether it was blocking shots or getting in the way and finding a way when it’s difficult.

Brown, on whether they now have a comfortable lead in the standings:
You never want to… it’s just about pushing forward and piling up the points as quick as possible. It has kind of been a different year for this group. Normally we’re not where we are, but it’s about continuing to push and gather points, because as it goes down the stretch, you want to have that cushion and be comfortable as much as you can be. I don’t think this team is going to be content or comfortable with – I don’t know what the lead is. We just keep on trying to pile up points.

Jonathan Quick, on what it says about the team to earn a win in Montreal:
We lost two in a row. Obviously that was brought up in the locker room before the game. Not that it means any more than any other game, but you’re really trying to pull out two points. I guess we were a little fortunate that they’re missing a couple of their key guys. But at the same time, that’s a great team that we played. It’s one of the top teams in the Eastern Conference and the league for that matter, too. To get two points in their building, you’ve got to be grateful for that but now we go into Toronto and we’ve got to get ready for that one now.

Quick, on what the team did well to limit high-quality scoring chances:
We protected the middle really well. We kind of kept the majority of their chances [to] a lot of low plays off the line, low-to-high, shots from the point. And when the pucks did get through, we were able to clear rebounds. So we battled. It was a heavy game for the guys on the backend because they had a good amount of possession time. We did as great of a job as possible to try and prevent those Grade-A scoring chances.

Quick, on whether winning in Montreal is special:
I mean no more than anywhere else. It’s a fun place to play. It’s a great atmosphere, so you get a little excitement from that. But at the end of the day, every team we play is a good team. It’s tough to win in this league no matter where you’re playing. So you just take the two points and get ready for the next one.