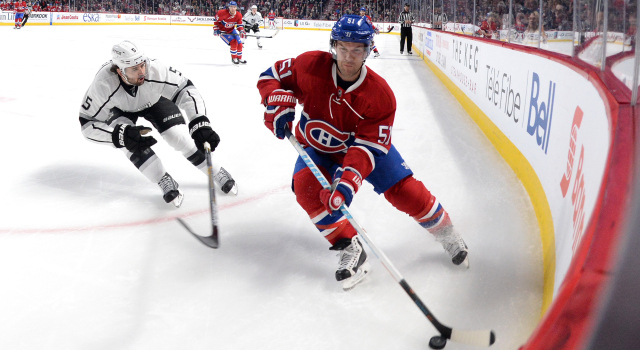 On whether the rest and relaxation in Mont Tremblant paid off:
We won. We knew that we were going to get a big load early from them, and that’s what happened. I think we weathered the storm and Jonathan made some big saves. We were able to score the first goal. It was one of those games where you’re thinking as it was going along that the first goal was going to be the difference-maker.

On whether this win speaks to Jonathan Quick’s competitiveness:
Well, how many times have we talked about that over the last four years, five years? He very rarely gives up a bad goal, and very rarely has back-to-back games where one of them’s not a dominant game.

On withstanding Montreal’s attack in the third period:
Well, you know what? Once you get the two goal lead, they start stretching the game out, and they’ve got mobile defensemen, so you know the play’s coming towards your zone It’s just trying to get the puck back and get it out. We were able to do it.

On Drew Doughty saying that the only player as competitive as him is Jonathan Quick:
About himself? That’s good, that’s awesome. I think Drew had an awesome game, too. He was bouncing back – he wasn’t happy with his game in Ottawa, either.

On whether it’s special to play in Montreal and win a hockey game:
It’s always special. Count the Stanley Cups and the championships. It’s still one of the Original Six teams. It’s the very same as Ottawa the other night. You forget about how many Stanley Cups they’ve won. It’s good for our players, being a California team, to come and see these Canadian cities and feel what’s going on around. It matters. [Reporter: Do you tell them to look at the banners, or do you look at the banners?] I always do. I remember – I was talking to Blakey, sitting up there today – I remember the first game I played in the old Forum, and it was one of the few games I remember, just because of the history of it. As tough as those teams were, I liked playing in the old Forum more than Maple Leaf Gardens, for whatever reason. It’s special. Special place. And this building, they recaptured enough of that feeling of the old Forum. It’s special to look up there. You see all those banners, and you count all the players, and you count how many of them are on those Cup teams. You try and remember how many guys that you’d played against, how good they were. It’s pretty special. The reason I remember that first game in there, it was opening night, so it had to be a Saturday night. We won 8-7, Chicago, and I think LaFleur had a hat trick.