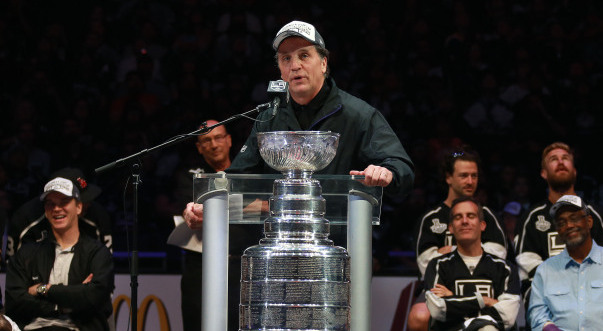 Los Angeles Kings President / General Manager Dean Lombardi was seen observing today’s “Development Day” where the Kings’ development staff travels to Citizen Business Bank Arena to work with the Reign players in Ontario. Lombardi took the time afterwards to answer some questions about the Reign, the science behind call-ups, the development of Michael Mersch and what he’s looking for out of Adrian Kempe at the World Junior Championships.

Ontario Reign Insider: How often do you get out here to Ontario?
Dean Lombardi: I intend to be a lot more in the future but we’ve had a number of issues getting our team up top going, so I haven’t been down here as much as I want but I will be down a lot more as things stabilize so to speak. That’s usually what happens. When your big team is, you know once you get through, sometimes it can go quicker in terms of getting their feet under them. But it’s hard to plan sometimes because there’s always a fire drill.

ORI: With the day-to-day in terms of keeping tabs on the Reign, what are your best resources for that?
DL: Video. You don’t miss anything. We get everything. In terms of how they’re playing in most cases, we’re up to speed on that. But you still need to have a presence down here. As far as the playing part that’s easy to cover.

ORI: How often are you in touch with the coaches?
DL: Rob Blake does more of that. I think it’s more on a macro level, if there’s a bigger issue, but generally anything on the day-to-day [with] coaches Rob Blake handles. That’s the way it’s set up.

ORI: How does having the team here strengthen the organization as whole as it relates to the development of these players?
DL: Well, we’ve been burned twice. Ironically, the times that we need to call guys up we’re on the East Coast but the biggest two things: Just the fact that you can have more of a presence. You see the development guys here constantly, there’s always somebody here where in Manchester you weren’t able to have that type of [contact ]… so it’s not only the GM, though, you’ve got your player personnel, your development people, your NHL coaches now have all-access to this. So you get that type of oversight. And secondly, the real impetus for a lot of this, don’t forget, was something the West Coast teams wanted to do a long time ago but we never got it off the ground because it always seemed to die, but the reason was the cap. So now when you call a guy up, other than like I said the way the last two went we were actually out east, but generally being able to recall a player and getting him in that day versus having to carry extra players because you’re 2,000 miles away is a huge benefit cap-wise. Those are the two advantages. But I think, interestingly, what really forced the West Coast teams to in fact follow this through was ‘it’s not fair.’ An East Coast team can call a guy up and we’re carrying extra guys and we’re not getting any cap relief. So that’s the second part that really pushed this through.

ORI: What goes on behind the scenes in terms of a call-up? How long is that process, and how long were you looking at Michael Mersch?
DL: That’s not a spur of the moment decision. You’re constantly, like your original question when Blakey’s calling down, you say, ‘OK, if we need a forward tomorrow, who is it, if we need a defenseman, who is it?’ You’re not just making that decision when you need it, you’re constantly asking that. So when you see all their games on video, so you have an idea up top, but you still … those guys behind the benches know the little idiosyncrasies and things. But that goes back to your other question, Blakey keeps tabs on that and who is the most ready, where [are] his liabilities and where would he most fit. If Dustin Brown goes hurt is different than if Jeff Carter gets hurt and that type of thing. That’s done, when Blakey talks to these guys every other day, that’s constantly on the docket.

ORI: What have you thought of Mersch’s play since the call-up?
DL: People have got to understand, as we’ve seen with all our players, there’s about 12 of them up there that have Stanley Cup rings who came through our system. The process, the learning curve never goes straight up, right? It’s always going to have little peaks. The key is to have it on a steady incline like this [Lombardi indicates an incline with his hands]. And so that’s the next step for him. It’s a huge adjustment, whether it’s Pearson, Toffoli, they all went through it. So the important thing that I think you see is to say, OK, you saw parts of his game that are going to make him an NHL player but … until the game you see here (in Ontario) gets there, it’s a process. So all you’re really looking for, you don’t sit there and go, ‘well, you’ve got to light it up.’ No, no, no. You’re just looking for little signs that what I see here and all the games I watched of him, show me a little and then keep on bringing it along. But if you look at all those kids that came up, it always went like this but there was downs, and if they don’t stay then when they go down they get specific instructions. What happens with a kid now, when he’s up there, you can talk about it, you can watch it on TV and everything else but until that player gets there and really gets a feel like, ‘holy smokes, there’s Sidney Crosby, there’s Malkin.’ That’s an incredible experience. And what will happen for the right ones is, ‘wow, OK. I’m out here with them. I think I can play here but I’ve got some work to do to get to that level.’ It’s kind of the way you’ve got to look at it. So to say ‘this guy’s an NHL player right now,’ you sign your own death warrant. Take it day-to-day. The key is to get them better every day. To start making projections is a waste of time.

ORI: How important is it for Adrian Kempe’s development to be playing at World Juniors?
DL: I think it is if he goes and plays hard. The problem is it’s not the American Hockey League. The American Hockey League is a way tougher league. It’s more out of respect for their country. It is a big thing for them to wear the colors. It’s a huge tournament, but it’s not the American Hockey League. Not even close. It’s more along those lines that it’s the last time he can enjoy the experience. What we try to stress to him is, ‘OK, you played at a very high level, played in the playoffs last year. So don’t go down and play in that tournament now that you’re playing against 19-year-olds again and think you can go through the motions. It’s only going to be beneficial if you go down there and play hard and be the best player in that tournament.’ What happens is some of these kids … you play in the American League playoffs, that’s hard, really hard for a 19-year-old. It’s physical, he’s still a baby in some cases. And then you go back and play with your peers and think it’s easy so you start taking shortcuts. I’ve seen that happen. Our stress to him was, ‘OK, you can go and we’ll let you wear the colors, but you’ve got to fricking make sure you’re the best player.’ No more ‘just play well.’ If you’re going to go and play back with 19-year-olds after playing with men you should be the best player. So if [he] approaches that way it will be good for him.