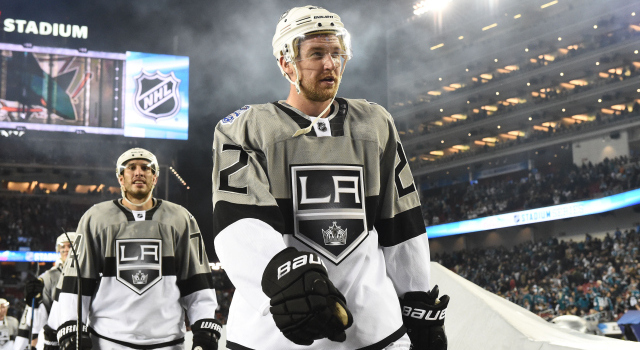 King suffered a broken foot that required surgery while blocking a shot in Los Angeles’ final preseason game on October 3 and has not yet played this season. Though he had placed his foot in a skate boot at the team’s El Segundo facility in the week before it left on the current road trip, he had not yet resumed skating until this week. A conversation with Dean Lombardi earlier on the road trip (Lombardi has returned to Los Angeles and was in Ontario today; you should read his Q&A with Lindsay Czarnecki) indicated that the hope was that King would be able to get some light skating in while the team was away, and that he would be able to take the ice alongside the team in a limited capacity upon its return. At this point, there’s still no timetable on when he could return to active duty.

Trevor Lewis, who last played in the 2-1 overtime win over Vancouver on December 1, traveled to meet the team in Montreal today. At this point, the Kings have not made any roster moves to activate Lewis from injured reserve, where he had been placed on Monday. That he joined the team with two games remaining on their six-game, 13-day road trip is an indication that he’ll be available for Darryl Sutter’s selection, though whether he plays against the Canadiens on Thursday won’t become clearer until Thursday’s morning skate. Lewis has totaled two goals and four points while averaging 15:18 of ice time over 24 games this season.

The Kings currently have 21 active players and would not need to make a corresponding roster move were they to activate Lewis. Matt Greene (shoulder surgery / LTIR) and Kyle Clifford (upper-body) are also on injured reserve.