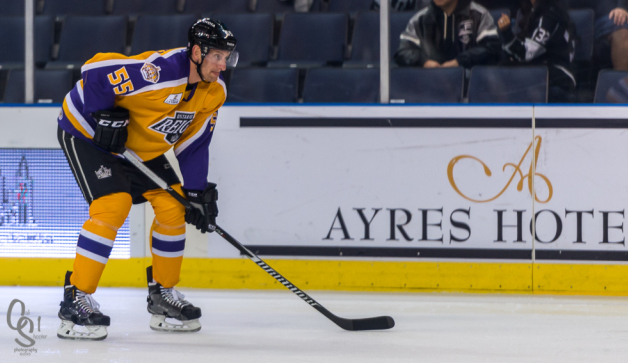 Some notes from today’s practice at Citizens Business Bank Arena where roll call was needed to mark players’ attendance.

–A day after being recalled by the Kings, No. 55 and No. 23 were spotted in Ontario. Defensemen Jeff Schultz and Nick Ebert were practicing and not on a plane. “They loaned me back to Ontario this morning,” Schultz said after practice. “The call-up was yesterday and then there’s no flights available to leave and then I guess they were just able to put me back to Ontario this morning. It was kind of a last minute thing and they just said to kind of wait and see what happens and I guess they didn’t need me. So I was able to practice today, which was nice after a day off yesterday.” Head coach Mike Stothers was a bit coy when asked about it, saying, “They didn’t go anywhere that I know of … They’re here today that’s all that matters,” and also joked that he was at Disneyland on Monday, so he wasn’t aware of the whereabouts of the two players anyway. “It wouldn’t have been that big of a deal,” Stothers said about if the two had left to join the Kings on their road trip. “We don’t play till Saturday so I’m sure things would have sorted themselves out and we would have had time to make some adjustments if we needed to to get someone from Manchester or elsewhere.”

–This week marks the continuation of life without Michael Mersch (with the Kings) and now life without Adrian Kempe (with Sweden at the World Junior Championship) so Ontario is now without their two top left wingers. Stothers mentioned after Tuesday’s practice that the left side duties will stay with Justin Auger and it opens more opportunity for Joel Lowry. “We can figure it out. I know for sure we’re not getting Kempe back till after the World Juniors. I just go day-to-day with Merschy. I haven’t been told whether he’s staying a certain length of time or if he’ll be back maybe Saturday,” Stothers said. “I’m not going to put much stock into it until Saturday rolls around because in the American Hockey League as you saw yesterday, Schultz and Ebert get called up, Merschy could return. I don’t know. That’s just life in the American Hockey League. Too many days in between to worry about it now.” Whatever way you look at it, it’s inevitable that different players will get a chance to move into bigger minutes as the Reign look into the weekend where they’ll host the Gulls on Saturday and the Condors on Sunday before heading into holiday break next week. “I think guys are obviously excited for more ice time for some players,” center Nic Dowd said. “Opens up some space and guys will get a lot more opportunity, which his what everyone wants. I think guys are excited about it. Hopefully guys will step in and play well right away and move forward from there.”

–The Reign had Monday off, so Tuesday was the day to get back to work after successful back-to-back home games over the weekend (wins over Bakersfield and San Jose). “It was nice to kind of regroup,” Dowd said. “It’s always nice to have one day off during the week where you don’t have to travel or practice and just get your life back in order. It’s good.
“[Practice] was good today. It was hard. Stutts likes getting after it on the day after the off day which is good because it kind of gets the legs going. Was a good day, had fun and guys competed.”

–Wednesday will be Day 1 of 2 for this month’s development days where the Kings’ development staff will work with the Reign players. “Those days are good. I think it’s good for both Stuttsy and the players to get away from each other for a couple days, gives him a break, doesn’t have to worry about practice too much and gives us a break away from Stutts too,” Dowd said. “I think it’s good. Those guys come in and obviously they’re teaching us stuff that comes right from the top so that’s the benefit in having them around a lot this year.”