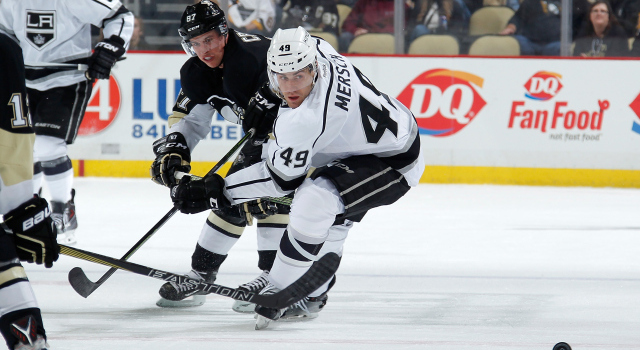 What you missed
The Reign eclipsed the 20-game mark for this season, winning back-to-back home games on Saturday and Sunday against Bakersfield (3-1) and San Jose (2-1 in OT) to extend their lead in the AHL’s Pacific Division with a 15-4-2-0 mark and a .762 winning percentage. The Bakersfield game was the team’s first without left winger Michael Mersch, who was called up by the Kings earlier in the week. Head coach Mike Stothers stressed after the win that the group was focused on who the have, not who they don’t have. The coach shuffled lines to fill the Mersch gap, most notably moving Adrian Kempe to left wing on the line with center Nic Dowd and Jonny Brodzinski. The result was a balanced scoring attack from the Reign (Kris Newbury, Brodzinski and Valentin Zykov). Sunday, the story moved away from Mersch as the Reign flexed their resiliency muscle once again, coming from behind to beat the Barracuda after being held scoreless in the first 58:51 of regulation before a Justin Auger tip-in goal served as the equalizer. The OT hero was no other than defenseman Kevin Gravel as he drove down the left side, beating Barracuda goalie Aaron Dell five hole. Stothers said afterwards that Gravel is “close” in terms of being NHL-ready and that he elevates his game in crucial times.

Highlights courtesy of ieProSports (we love when they come to shoot games!) of Saturday’s win against Bakersfield:

Kempe off to World Juniors
Adjo, Adrian Kempe (Swedish for goodbye). Stothers confirmed after Sunday’s game that the forward was leaving the team on Monday to join Sweden at the World Junior Championships in Finland. The tournament starts on Dec. 26 and Sweden will play that day against Switzerland. Depending on how well the Swedes do, Kempe could be away from the Reign up until Jan. 5, when the medal games are scheduled. It’s a blow for the Reign, who will be without another top forward (Stothers joked that all his left wingers are being taken away from him; see: Mersch), but these tournaments have always been noted as great opportunities for growth. Kempe has 16 points in 21 games for the Reign (7 goals, 9 assists) and will be missing his first games of the season. He tweeted this out on Sunday night after the Reign’s win, so he does seem to be excited to join his homeland mates. Sweden finished fourth at the WJC last year.

Michael Mersch’s call up
Mersch took his 12 AHL goals and earned a call-up with the Kings, much to the delight of his teammates and Stothers. The left winger out of the University of Wisconsin made his NHL debut on Friday against the Penguins and got over 10 minutes of ice time from Daryl Sutter. His teammates in Ontario used the words “excited” and “dreams coming true” when referring to his recall. My favorite quote came from Gravel, Mersch’s roommate, who claimed he stared at the walls a bit in their apartment after dropping Mersch off at the airpot. The Reign played on Saturday, when Mersch was in his second game against the Sabres, but eyes were on him Friday, and Stothers lit up when saying he “keyed in” on Mersch every time he was on the ice against the Penguins.

Gogol makes debut
After not making the lineup in his first three tries since being picked up by the Reign on Nov. 28, forward Curt Gogol made his debut with the team by playing in both games over the weekend. Gogol skated with Ryan Horvat and Paul Bissonnette on the rugged fourth line Saturday and was involved in what Stothers called a “spirited” fight on Sunday. The 24-year-old finished his checks and will be another “energy” option for Stothers when necessary. Here’s the video of the fight with San Jose’s Alex Gallant. Haymaker alert: