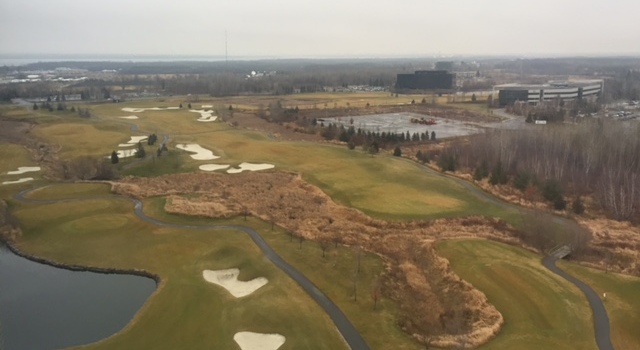 So our days of enjoying the balmy Buffalo climate are over. Here in the western suburbs of Ottawa, much closer to Kanata and the Canadian Tire Center than Parliament Hill, a heavy rain welcomed the team to town shortly after the plane touched down at YOW following a 40-minute flight. The weather was in the 30’s, but the precipitation fell as rain and not sleet, so we’re still yet to see our first snow of the season. That pre-New Years Calgary/Edmonton portion of the divisional swing is licking its chops.

Along with the Coyotes, Panthers, Hurricanes, and, perhaps, the Oilers, the Senators are a team that plays in more of a suburban area than any sort of a central business district, and Kanata is way, way out in the western expanses of the Ottawa metropolitan area. This is the second time since I’ve joined we’ve stayed at the current team hotel. Last year we were downtown, surrounded by government buildings, as plans to have been officially honored by Prime Minister Stephen Harper on Parliament Hill following the club’s Stanley Cup championship were scuttled following the passing last December of Montreal Canadiens legend Jean Béliveau.

It has become a tradition: when we stay in suburban Ottawa, the broadcasters and FOX Sports West contingent eats Chinese food. Two seasons ago, we enjoyed a feast at Phu Yen; last night, it was Lucky Dragon. No, there haven’t been any team Chinese dinners in Vancouver or New York, or any other cities one might associate with having outstanding Chinese food. Only suburban Ottawa.

It’s a quick in and out on this leg, so to stay near the arena and avoid a double-commute on Route 417 makes sense. There’s actually a wrinkle to the Canadian half of this nearly two-week jaunt: following tonight’s game, the team will travel to Tremblant, Quebec, where they’ll stay for two days, while the rest of the traveling party (including LAKI) will head to Montreal. I’ll still correspond with the team and post reports from the road, but won’t actually be “present” at practice. Several of us are planning on taking in the Canadiens-Sharks game from the Bell Centre on Tuesday night.

It’s time to get ready to head to Canadian Tire Center, Insiders. I’ll join Steve Lloyd and some friends on TSN 1200 from the rink and will post the time (and a live audio link) on Twitter that the hit will take place. There’s plenty more to come on a chilly, damp Monday from the far reaches of Canada’s capital…