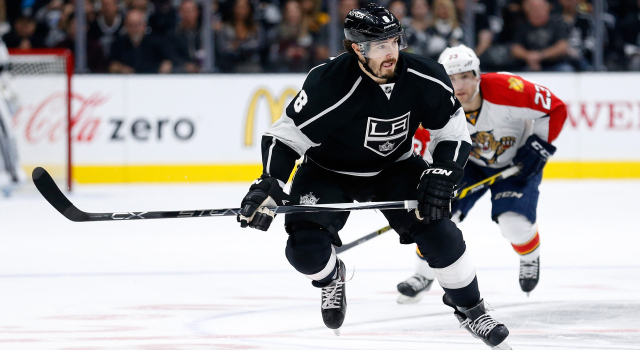 Early in his Los Angeles Kings tenure, Drew Doughty said that he and Matt Greene had discussed opening a Tim Horton’s franchise but quickly abandoned the plans.

“[Greene] had looked into it, but it has to be your only source of income, or something like that,” Doughty said.

A Tim Horton’s franchisee would only clutter the resume of a player who turned 26 last week, anyway. Doughty is a two-time Stanley Cup winner, a two-time Olympic gold medalist, a World Juniors gold medalist and All-Star, and a former second overall pick.

But he has never won the Norris Trophy, never mind that he’s among the most individually skilled and group-accomplished players on the planet regardless of position. P.K. Subban has won a Norris Trophy. Duncan Keith has won two, as has Erik Karlsson, the reigning Norris winner and a player who will oppose Doughty in tonight’s Kings-Senators game (4:30 p.m. PT / FOX Sports West / KABC 790 / I Heart Radio).

Doughty understands that there will be a spotlight on him not only when he returns to Canada, but when he opposes a fellow defenseman of Karlsson’s caliber.

“It kind of seems that way sometimes, but I kind of relish that opportunity too, when I come into town and play a high-skilled or very good defenseman like Erik Karlsson,” Doughty said. “I obviously want to out-play him and have our team win, but obviously it’s not about me and him, it’s about two good hockey teams playing and we want to come out on top.”

Both teams are coming off losses. While the Senators were visibly upset following their performance in a 3-1 loss to the Montreal Canadiens on Saturday night, the Kings have been happy with their play through three games of their six-game, 13-day road trip. Both teams are currently in playoff positions.

“We want to be one of those teams,” Doughty explained, “that you don’t lose two in a row, that you don’t want to play us when we’ve lost a game, so we’re looking to come out hard obviously and get another win here. Ottawa’s a good team. We know that top line of theirs obviously has a lot of firepower, I think they’re the second-highest scoring line in the league, and they obviously have Karlsson there on the back-end who puts up a lot of points, so we’ve got to play good defensive hockey, and that’s the style that we’re used to playing, and then obviously put some more pucks in the net than we have been lately.”

Doughty has always been an honest and forthright team representative when speaking with the media, and this year, in addition to the irreplaceable skill that he brings to the lineup, was asked to add to his leadership qualifications. He has done so, and even though doesn’t wear an A on his jersey, he’s a highly respected voice on the club’s leadership core.

Never mind difficult to quantify intangibles such as leadership. Doughty has been, through the first 29 games of the season, as deserving as any for the award presented to “the defenseman who demonstrates throughout the season the greatest all-round ability in the position.” Statistically, he has four goals, 17 points and a plus-12 rating in 29 games.

“I would love to win [the Norris Trophy] one day, but it’s not all I think about, that’s for sure,” he said. “It’s always in the back of my mind, but all I really care about is contributing to this LA Kings team and hopefully winning some more championships, and if we have a good team and I’m playing well, then hopefully I get recognized that way. The Norris is an individual trophy and I’m all about team trophies, so that’s all that matters to me.”

“Hopefully winning some more championships” is poetry to the ears of Kings fans who suffered through the first 44 years of the team’s postseason calamities – were they to make the postseason at all – and as stated by Doughty, more important than individual recognition.

Still, Doughty understands that when he takes the same ice as Karlsson, the Norris Trophy discussions will be at the front of many observers’ minds.

“It kind of seems that way sometimes, but I kind of relish that opportunity too, when I come into town and play a high-skilled, very good defenseman like Erik Karlsson,” Doughty said. “I obviously want to out-play him and have our team win, but obviously it’s not about me and him, it’s about two good hockey teams playing and we want to come out on top.”

Karlsson is a team captain and leads all defensemen (and ranks sixth amongst all skaters) with 32 points. But the Senators, who’ve allowed 90 goals in 30 games, do not employ the same type of defensive-minded systems as the Kings, and Doughty, though he only averages 11 seconds of ice time more than Karlsson, has averaged 2:59 of shorthanded time per game, compared to the 47 seconds averaged by Karlsson. While Doughty has better possession numbers overall, Karlsson’s metrics are higher relative to the rest of his team than Doughty’s are to the Kings, the league’s top team as judged by their Corsi-for percentage. (Ottawa ranks 22nd.)

Does Doughty simply not get enough respect from those who would have to stay up to 10:30 p.m. to watch a Kings game?

“Well, he should,” Darryl Sutter said. “He’s won two Stanley Cups against Eastern Conference champions and been a major part of it, so if they don’t know him, then they don’t watch hockey very much.”

That’s something Doughty is aware of, even though he understands that the comparisons aren’t entirely applicable.

“This is my chance for the Eastern side of the world to see me play,” he said. “I know that [Los Angeles reporters] get to see me a lot back home and see what I do night-in and night-out, but these guys don’t. I know I’m a completely different defenseman than Erik Karlsson is, then P.K. Subban is, too. They play completely different than me, so I really don’t even see how I’m comparable to them with the two styles of play. So yeah, I’m sure those comparisons will be made, I just want to show everyone that I can play good hockey both ways and that I do deserve to be in those talks.” 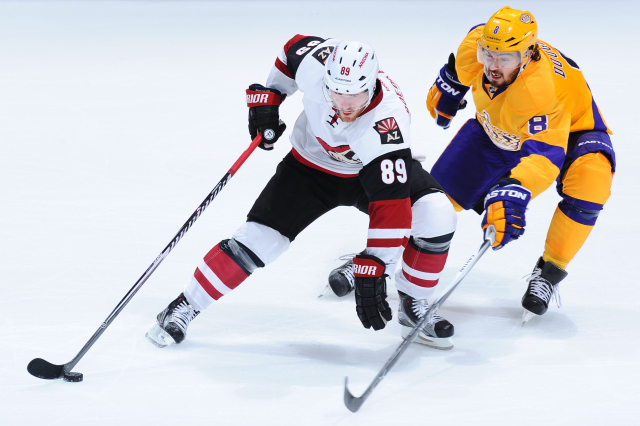