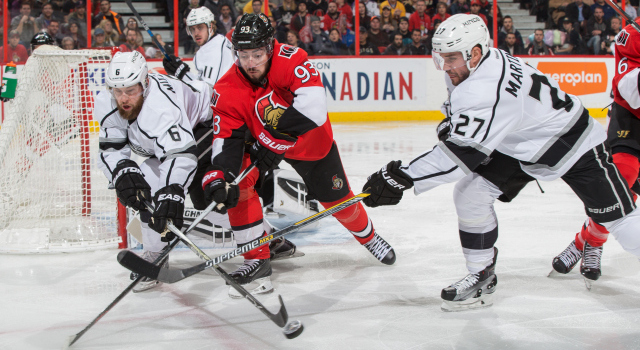 Tyler Toffoli, on whether he enjoyed playing in Ottawa again:
For me, it doesn’t really matter where we’re playing. We’ve got to win games and find a way to win at this point of the season and separate ourselves from the rest of the teams in our division and give ourselves a little security. We’ve got to make the playoffs and go from there.

Toffoli, on whether he thought the momentum shifted after his goal in the second period:
I mean anything can happen. We had our chances to score goals after that. I just didn’t capitalize and we couldn’t find a way tonight.

Toffoli, on whether he is looking forward to the team’s trip to Mont Tremblant:
Yeah, we’re going to relax. You know, take some days here and get our legs back. It’s been a long trip, that’s no excuse for us, but it will be nice to get away for a few days.

Jake Muzzin, on what contributed to defensive lapses in the second period:
Well, I think we were just a little bit off in our passing, in our execution and that allowed them to get some rushes and opportunities to score. And when you give a team that’s a high-scoring team opportunities to score, they’re going to score and that was clear tonight. On the rush, you give them opportunities rush play, they’re going to take advantage of it and they did that tonight. We worked hard. It’s tough to win when you spot a team four. [Reporter: You did come back and make it 4-3.] Yeah, we had faith in here. Just go out and win the first 10 and go try and win the second 10. We actually scored right on the 10-minute mark. And then tried our push for the second and they got one late and that kind of hurt us a little bit, but you never know what can happen.

Muzzin, on whether he’s looking forward to the team’s excursion to Mont Tremblant:
Yeah, regroup, refocus, take your mind away from hockey for a little bit and get ready for Montreal.