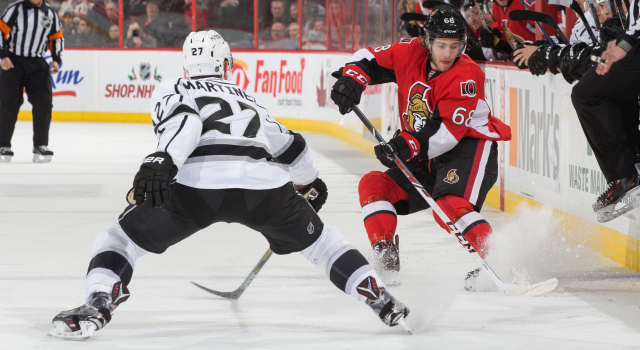 On the loss:
I thought we looked like a tired team. It caught up with us a little bit. That’s the highest scoring team we’ve played this year, and I just think we made some fatigue mistakes, and they buried them.

On whether he had the sense that the team was capable of coming back:
Absolutely. We believed we were coming back, and it was a soft goal to make it five-three. It kind of takes the wind out of your sails.

On the team’s plans in Mont Tremblant:
A day off and practice. Got ice, we’ll get our work in. Even though it’s a long trip, we had the first game, that was three-in-four days, and that was a hard game, the Columbus game. Then this part was three-in-four-days and it was hard, too, so now we’ve got to get the rest in and try to get ready for a tougher team than we played tonight.

On the choice to use seven defensemen:
We thought that quite honest, the last two or three games, we didn’t get much out of the bottom part of our forward lineup at all, and we just felt that Kopi, [inaudible], they both played a hell of a game for us, and they knew they were going to get played lots and they both did, but where we have the forwards slotted, the third and fourth lines haven’t given us much.

On what went wrong in the loss:
Not too much. They’re a high scoring team, and they got some opportunities and they put it in the net.

On Ottawa’s intensity being called out after their previous game:
I’m not aware of that. I wasn’t in their coaches meetings or their team meetings.