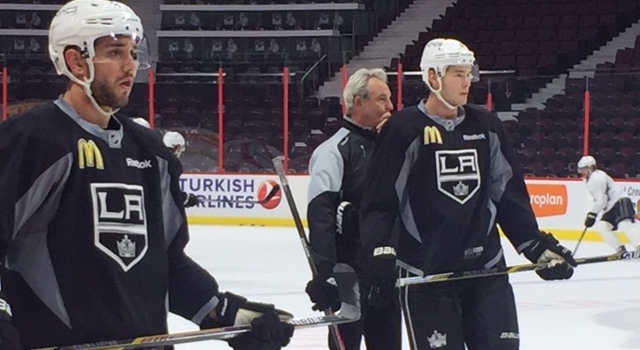 Good afternoon (or morning, for many of you) from Ottawa, Insiders. The Kings have returned to the team hotel from the morning skate, where they had aligned thusly:

-No changes are expected for tonight’s lineup, other than Jonathan Quick entering in for Jhonas Enroth. Derek Forbort is expected to be scratched.

-The Senators made several changes to their lines at the morning skate but aren’t expected to bring any new players into their lineup. They’re likely to line up with Smith-Turris-Stone, Hoffman-Zibanejad-Ryan, Dziurzynski-Pageau-Chiasson and Borowiecki-Lazar-Neil with defensive pairings of Methot-Karlsson, Wiercioch-Ceci and Cowen-Wideman. Craig Anderson is expected to make his 15th consecutive start in net. He’ll be backed up by Andrew Hammond, who was recalled from his conditioning assignment with AHL-Binghamton yesterday.

-I’ll have stories on Drew Doughty and Tyler Toffoli later today, followed by a game preview. Doughty will also join me for a pre-game chat in front of the FOX Sports West banner during tonight’s Kings Live pre-game show.

Doughty said that several years ago, he and Matt Greene somewhat seriously inquired about franchising a Tim Hortons in Southern California.