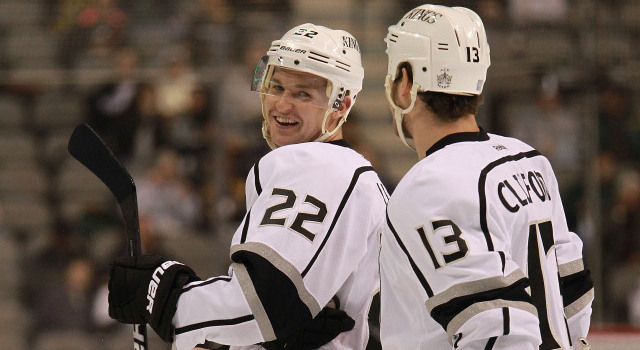 Clifford suffered his injury when Victor Hedman elbowed him in the face during the home stand finale against Tampa Bay two Sundays ago, and Darryl Sutter referenced “protocol” when discussing his recovery. Lewis last played against Vancouver on December 1.

This gives the Kings a balance of 12 forwards and nine defensemen, which isn’t really a balance at all. I’m trying to get to the bottom of why two defensemen were recalled when two forwards were placed on injured reserve, but at the moment I can only speculate. Salary cap flexibility may have influenced today’s recalls, though the team retains the option to place Matt Greene on long-term injured reserve, which would free up $2.5-million of salary cap space and to my understanding has not occurred yet.

The Kings now have four players currently on injured reserve: Lewis, Clifford, Greene (shoulder surgery) and Dwight King (broken foot). Earlier on this trip, LAKI learned that the hope was that by the time the Kings returned to Southern California, King would be able to skate on his own in a limited capacity.

In 20 games this season with Ontario, Schultz, 29, has registered three points (0-3=3), a plus-7 rating and 10 penalty minutes. He is a veteran of 409 NHL games and appeared in Los Angeles’ season opener.

The 21-year-old Ebert was chosen with the final pick of the 2012 NHL Draft. The six-foot, 203-pound New Jersey native has four assists and a plus-seven rating in 16 games with AHL-Ontario this season and was a member of the Manchester Monarchs’ 2015 Calder Cup championship team. He has eight goals and 18 points in 61 career AHL games.

Both Schultz and Ebert are scheduled to fly east to meet the team on Tuesday.

More to come on this news as it develops…