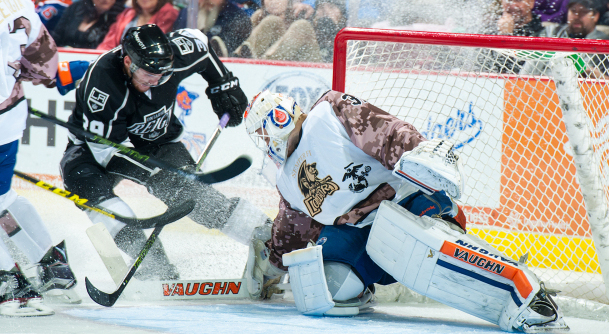 Ontario Reign (Los Angeles Kings AHL affiliate) vs Bakersfield Condors (Edmonton Oilers AHL affiliate)
Records: ONT – 13-4-2-0; BAK – 10-9-1-1 (W-L-OTL-SOL)
Saturday, December 12, 2015, 6:00 p.m. PT
Citizens Business Bank Arena, Ontario, CA
Reign pre-game notes
–Expect some line changes up front tonight and keep an eye out for line rushes during pregame warmups if you’re at CBBA. With Michael Mersch up with the Kings (who are playing the Sabres right now), head coach Mike Stothers hinted this week he may be making interesting changes to the forwards.
–Surprise, surprise. Goaltender Peter Budaj (12-3-1) is expected to make the start between the pipes.
–The Reign hold the 2-1-0-0 edge against the Condors this season, but the 1 was the most recent game, a 3-0 loss nearly a month ago on Nov. 14.
–Forward Sean Backman is playing in his 300th AHL game tonight.
–The Reign are wearing special jerseys in honor of their affiliation with the Kings. All jerseys will be auctioned off afterwards to benefit the University of La Verne Scholarship Fund.
Scouting the opposition
–The Condors were at home last night, defeating the San Diego Gulls by a 3-0 score in which former Kings goalie Ben Scrivens notched the shutout. Scrivens, the former King, stopped 31 shots and is expected to start again tonight against the Reign.

–Defenseman Mark Fayne was placed on waivers by the Oilers earlier this week and after clearing them, was assigned to the Condors. This year marked 6-foot-3, 212-pound, New Hampshire native’s sixth NHL season.
–Defenseman Brad Hunt leads Bakersfield in points with 19 (4 goals, 15 assists).