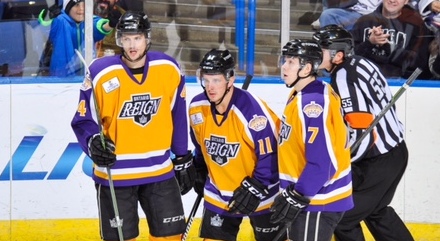 Reign game breakdown
No Michael Mersch, no problem, at least for this game on December 12. The Reign played their first contest after their leading goal scorer was called up to the Kings and outworked a played-the-night-before Bakersfield squad in a 3-1 win. Valentin Zykov had a goal and an assist and Kris Newbury and Jonny Brodzinski both scored in a game in which the Reign never trailed to improve to 14-4-2-0. Peter Budaj stopped 18 of the 19 shots he faced to pick up his lucky 13th win.

Best quote
Zykov, on his setup pass to Newbury in the first: “He jumped from the middle like a bullet, it was obvious to make a pass to him. You cannot deny this guy.”

Three stars
–Valentin Zykov – With a goal and an assist, Zykov’s an easy star pick. His goal in the second period was his first since Oct. 23 and his fourth on the year. His assist in the first period on Newbury’s goal showed his poise as the rookie waited patiently on a streaking Newbury to find his spot and then fired the pass to the front. Zykov was the beneficiary of a great pull drag move by Nic Dowd on his second-period goal, which was an easy tap in. After being scratched last game Zykov said after this one he was told to work on “details,” by the coaching staff. Noted.
–Jonny Brodzinski – After going scoreless in his first 17 games, Brodzinski now has two goals in two games. Reign head coach Mike Stothers has been saying all along that once Brodzinski got his first one the floodgates would open. Perhaps we are seeing the beginning of that. The rookie out of St. Cloud State literally crashed the net to hammer in an Adrian Kempe rebound at the 11:10 mark of the 2nd period to put the Reign up 2-0. Brodzinski, who was skating on a new-look line with Kempe and center Nic Dowd, also got time on the penalty kill and power play. He nearly had two goals, missing wide on an empty-net opportunity in the final moments. And finally, his goal was originally credited to Kurtis MacDermid, but rightfully changed between periods and stood as the game-winner.

–Kris Newbury – The Condors killer. The veteran centerman scored in his first home game since his return from a broken foot. His first-period goal was his fourth in his curtailed eight games this season, but it must be noted that all four of his goals have now come against Bakersfield. Newbury’s tally 12:20 into the game came as he had a full head of steam toward the net (like a bullet according to Zykov) and Zykov made a pass from behind the net in which Newbury one-timed by Condors goalie Ben Scrivens. Newbury also would have had two goals … if not for missing on a wide open power play shot in the third.

Turning point
–The Condors’ lack of discipline in the third period allowed the Reign to enjoy three power plays. As Ontario held dearly to its two-goal lead, the pace of the final frame was dictated by the carousel at the penalty boxes (a fight included) and the Reign were able to do just enough, and not too much, to let the clock roll right out.

This and that off-ice
Mersch, who was called up from Ontario to the Kings earlier in the week, played in his 2nd NHL game on Saturday. The left winger finished with a stat line of 1 SOG in 14:32 minutes of ice time. More importantly for the Reign, they were able to win without Mersch, who had 12 goals for the team lead before his recall.

Next up
It’s Star Wars night (day, really) tomorrow as the Reign host the San Jose Barracuda in a 3 p.m. game. Ontario has gone 2-1 against the Sharks affiliate this season.