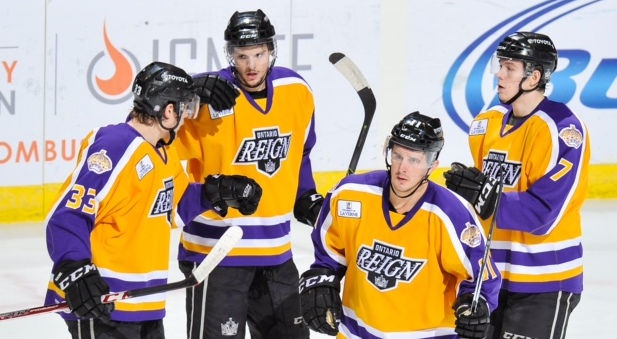 Reign head coach Mike Stothers, on line changes:
What line changes? There wasn’t any line changes tonight. Just normal game. Oh, yeah, Mersch was gone. That’s right. … Kempe was on the left side, which was good. I think that’s good for Dowder, as a right-handed shot dishing off to Kempe and it allows Newbs to be a left-handed shot dishing off to Backs. Augs, he can play anywhere, so that’s no big deal. (FYI, Auger was playing with Newbury and Backman tonight). I liked having Kempe and Brodz up there (FYI, Kempe and Brodzinski were playing with Dowd), I thought they did good. I was happy with all the lines. Is that going to stay that way? You’re probably gonna say are we going to do that tomorrow at 3 o’clock, for now, yes.

Stothers, on Zykov’s big game after being scratched last game:
It wasn’t a matter of being disappointed in his play at all. We’ve gotten ourselves in a situation where we had some extra bodies and you want to try to keep everybody busy. Brodz sat out the first game (last weekend) and Z sat out. Certainly don’t want to make a habit of that because they’re young guys and they need to play and they need to develop, but I don’t think it hurts to sit out either as a young guy. Sometimes you just expect that you’re going to play. I don’t want them to expect that they’re going to play, I want them to earn that they’re gonna play. The response has been good from both of them. Brodz finally got his first goal after sitting out. Z I thought had a great game here tonight outside of he got on the wrong side of his guy in the neutral zone there and there was about 2:20 on the clock and we managed to get it out of our zone with about 1:07 left on the clock. So we talked to Z about that between periods. We addressed that and we’re going to move on. (Reporter: Z talked about that after his scratch the coaching staff talked about working on details). That’s good. That’s good that he’s applying what we’re saying. Details. Everything’s details in this game. That little episode in the second period was a detail … that’s a long time in your own zone. You’ve got to learn from those things. When they start to apply the things we’re trying to get through to them to have success for everybody, that’s a good sign. I take that as a sign that Z’s very coachable. That’s great.

Stothers, on guys stepping up without Mersch in lineup:
We’ve tried to make it a point of not who we’re missing, but who we have. There’s a lot of guys who I feel are good hockey players and they’re looking for more minutes or bigger opportunities or certain situations. I thought everybody did a real good job of stepping up tonight. I thought we played a pretty good game. I think it was 19 shots against, which is good. We played the way we needed to play. That’s a good team. Bakersfield came off a big win last night and I thought it was a very entertaining game and now we’ve got to put that behind us and get ready for 3 o’clock tomorrow afternoon and get ready for San Jose.

Stothers, on the Zykov-Crescenzi-Samuels-Thomas line:
I thought they had some good zone time, offensive zone time. Z’s a strong guy. He might not be as tall as Crescenzi and JST but man, when he wants to be a dog on a bone, it’s hard to get the puck off him. And JST and Cres just do what they do. They use their size, they use their strength, they’re hard to play against. I don’t think any of them have dropped their gloves all season long but they’re hard to play against. I think that’s good. They’re reliable, Cres and JST are very reliable in our own end and Z’s becoming that for us. You’ve got yourself a situation where we’re happy with the lines we have, we’re happy with the depth we have and now we don’t have to over-play anybody, which is a big turnaround. It was a positive evening I guess.

Stothers, on the PK:
I hate when we talk about that because you guys (media) bring it up and then the next night we get lit up and then it’s like, ‘what’s wrong with your PK’? We’ve had it where we’ve had a good power play and sometimes you don’t score. Bakersfield came in, very good power play, they didn’t happen to score tonight. I think the biggest thing that I’d like to say is we kept it to four (penalties for the Reign). When we climb over that four mark is usually when we get ourselves into trouble. Big Mike was huge on our penalty kill. You guys know it was usually Dowd and Mersch going over the boards to start the penalty kill but we’ve got Newbs back and now we’re going to experiment. We’re going to try to broaden some roles for Brodzinski and maybe Kempe in Mike’s absence and do that, but your best penalty killer is your goalie. Buds was good for us, Cres was unreal. I thought we did a good job. We’re already thinking about tomorrow. We’ve got to stay on the ice. We can’t take bad penalties and keep them to a minimum.

Nic Dowd, on playing without Mersch and with Brodzinski and Kempe:
It’s a little different. I played with Merschy obviously all year and I think he has a pretty unique style compared to Kempe and Brodz. It was good. I know Brodzy loves to shoot the puck and Kempe loves to shoot the puck so I know I probably overpassed a little bit but it works out because they’re always finding a way to get open.

Dowd, on his move to set up Zykov:
I’m just glad it worked. Stuttsy probably would have ripped my head off if I would have put it through his legs and not even have got a shot on goal. He probably would have liked me to shoot it but it went in so he can’t say much. I heard him (Zykov) yelling. Kempe made a good play on the chip. He (Zykov) actually made a really good play picking it off and shooting it. It wasn’t right on his tape.

Dowd, on playing with Kempe:
I really like playing with him. He can move, he can move his feet. Obviously he can really skate. I think a little bit different than Mike is Mikey loves to go to the net whereas Kempe like to pass too, he’s kind of in between. It’s good to play with him and just feeling it out. He’s always open so it’s nice. He has a mindset to find that hole in the o-zone and hopefully I can keep finding him.

Dowd, on what it was like without Mersch:
It was good. To be honest, you get in the game and you don’t even think about that stuff. Excited to play with those two (Brodzinski and Kempe) and I think the biggest thing was that probably penalty kill was a bit different. I killed less tonight than I ever have and I killed with two or three different guys whereas I always used to kill every time with Merschy. It’s good and bad. I enjoy the ice time but it’s nice to be fresh 5 on 5 and on the power play.

Dowd, on with Mersch out is he going to the net more:
I do, yeah, which is nice. With Merschy, I was more of a perimeter guy, getting him the puck to the net. Which is fine but it’s nice to be at the net too because Kempe and Brodz, they’ll play the perimeter too and they’ll play inside and it did allow me to get to the net a bit more. I actually found myself for the first time standing in front as a screen, which never happens really because I’m usually on the half wall or in the middle and Big Mike’s in front. So yeah, it was a little different. It was nice.

Jonny Brodzinski, on his goal:
Just a hard-working shift … Kempe was in front of the net. High tip on the pad, he couldn’t bury it. I think he had two or three whacks at it and it was just sitting there for me so just kind of came in and cleaned up the trash.

Brodzinski, on breaking the slump and scoring again:
You finally you get the monkey off the back last game and they’re starting to roll now but it was just a hard-working shift by my linemates. (Reporter: Must be some relief after scoring against Charlotte) Oh for sure, it’s been a long time coming I think. With all the posts and chances, but we’re playing well as a team right now and that’s the big thing.

Brodzinski, on skating with Dowd and Kempe:
I played with Dowd in college (at St. Cloud State). I think we played a year, year and a half together so getting rekindled with him. And Kempe’s obviously a great player to play with no matter whose line he’s on.

Brodzinski, on missing open net on ENG attempt:
I just didn’t want it (laughs). That’s kind of one you want back but what can you do, we got the win.

Brodzinski, on what is special about Dowd’s game:
Just the way he sees the ice. You saw in his assist to Zykov, he makes plays like that look easy and I think that’s one of the big things. Defensive zone, too. His ability to break the puck out and get you in the offensive zone to create those chances.

Brodzinski, on playing PK:
It’s a role that I just kind of got put into a little bit ago because of Mersch being gone but I did it in college, I did it in junior, so it’s nothing I’m not used to.

Brodzinski, on what it was like without Mersch:
It’s different, but you’ve just got to keep rolling no matter what and congrats to him. It’s a huge step for him and we’re all excited for him.

Valentin Zykov, on his game:
I can’t say much, just a good game.

Zykov, on stepping up after being scratched:
Definitely, yeah. I was able to generate a little more speed tonight and create some more offense than usual.

Zykov, on what he was told he needed to work on after the scratch:
Details. Mostly just details that make a big difference.

Zykov, on his pass to set up Newbury’s goal:
He jumped from the middle like a bullet, it was obvious to make a pass to him. You cannot deny this guy, he really wanted it so bad.

Zykov, on playing without Mersch:
He had most of the goals on our team so we knew we gotta step up without him.