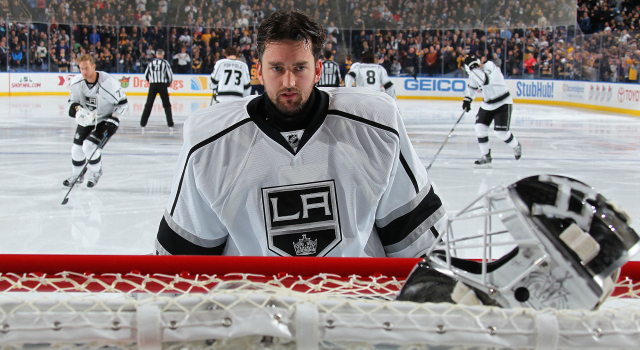 Jhonas Enroth, on Buffalo’s second period goal being overturned on a coach’s challenge:
That was a good play. I like that rule now. But that’s the game these days. I’m happy with it tonight obviously, but I don’t know if we should have it in the future. But we’ll see what happens.

Enroth, on Ryan O’Reilly’s game-winning goal in overtime:
It’s still a bit disappointing. I wish I would’ve stayed on my feet a little bit longer. I just saw him going down and I thought he’s going down and he just whacked the puck and he beat me on my blocker side. So it was a really nice second effort from him. And yeah, I wish I would’ve played that a little bit differently, but that’s how it is.

Enroth, on what it was like playing in Buffalo again:
It was great. Obviously I’ve been here in this organization for seven, eight years and I know everyone around the rink and all that. So it’s special to see everyone today. And actually, when I was warming up, I ran into Terry Pegula and we chatted for a couple minutes and it’s good to see everyone here. Yeah, definitely emotional and special for sure, but I think I controlled my emotions. And when the game started, it was just another game for me. I felt pretty comfortable.

Tanner Pearson, on his handshake celebration after Marian Gaborik’s goal:
It was a joke going the other day in practice and then I said ‘The next goal the three of us are out, we’re going to do it,’ and we did it.

Pearson, on the team’s performance:
I think obviously we came out a bit slow. I don’t think three shots in a period is going to cut it in any game against any team. We’ve got to clean up that obviously. I thought we got better as the game went on but we couldn’t seal the deal.

Pearson, on playing a lot during a busy part of the schedule:
Yeah, I mean everyone plays the same amount of hockey. So you can’t really use that as an excuse but at least we got one point out of it, which is alright.

Pearson, on whether he likes the way his line is playing recently:
Yeah, I think as of late we’ve kind of been clicking and I think that’s the biggest thing is as soon as you can get chemistry as quick as possible, it helps out. I think we’re showing it in stints. We’ve just got to be more consistent of it.

Pearson, on whether playing more hockey games is helping to build chemistry on his line:
Yeah, for sure. The more hockey you play together, the more you’re going to gel. So right now it’s there, we’ve just got to keep it going every shift.

Pearson, on whether Drew Doughty stepped his game up late:
I think he does it night in and night out. He’s pretty consistent at what he does. That move he made in overtime kind of shows he’s pretty quiet when he does his stuff on the backend, but he can also contribute offensively.