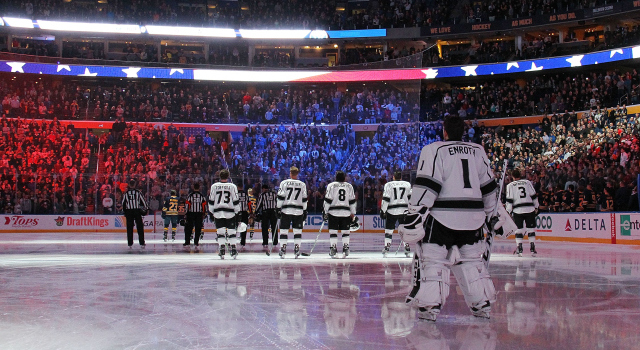 On successfully challenging Buffalo’s second goal:
Well, our video guys all those plays. They made the right call, and it was that close in a low-scoring game that you’re going to call it, anyways. And it’s the right call. Quite honest, once you look at it from that other angle, it’s not even close, so that’s it. That’s the rule, that’s it. That’s what video’s for. [Reporter: Just procedurally, how do they relay it? They see it, and how does it go when the kids see something, the video guys?] Just comes right through the radio to us. Ranford’s got one, and they have one in the video. Davis has got it all.

On how he views earning a point on a night Buffalo was strong at home:
So did the Kings have a strong performance on the road tonight. Give the Kings some credit, too. [Reporter: I give the Kings a lot of credit. In the third period, what did you like about the way the team came back?] We had opportunities to finish to win it. Heck, we had great opportunities. Gabby and Looch, the last couple of seconds left.

On Jhonas Enroth:
I mean, I’m sure he’d like the power play goal back. I wouldn’t call that a great goal, but other than that he made saves. Hey, that’s what a back-up’s job is. Come in and get your points. No nothing around it. You know what? Your back-up goalie and your fifth, sixth, seventh defenseman, and your fourth line, they’ve got to win you these games. We’ve played a lot of hockey. We’ve played back-to-backs and traveled all day and went to Columbus, put on how much our top players have played in the last seven or eight days. I give ‘em credit. … And we had chances in overtime, too. Drew made a great play. If he scores that, that’s a highlight. If he doesn’t score it, now all your memories are getting scored on.