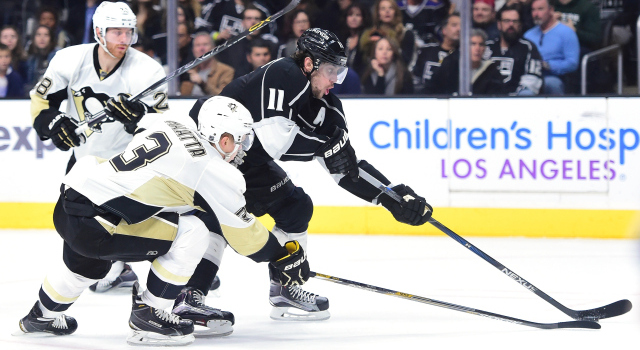 When Los Angeles and Pittsburgh met last Saturday, the Kings put four goals past Marc-Andre Fleury, two of which were scored off rushes.

With a one-nothing lead, Christian Ehrhoff got a stick on a puck during offensive zone pressure, leading to a three-on-two rush that he finished off with patience on a quick release from the slot. 64 seconds later, Milan Lucic elected to shoot on a two-on-one after Jake Muzzin’s block ended Penguins zone time, punctuating a home performance in which L.A. generated quality opportunities off the rush.

“It was coming out of our zone more than [entering the zone]. We talked about it this morning, even,” Darryl Sutter said about Los Angeles’ success in generating rush chances. “It was getting out of our zone as quick as we can. That’s always a challenge for our team – when we’re on, we’re moving it out of our zone. The puck is still faster than anybody out there on the ice, and if you can get yourself in good position, get the puck in good position, the way the game is, there’s not a whole lot of the game played in the neutral zone anymore. It’s more zone-zone, D-zone, O-zone.”

That they were able to generate good looks as part of five total goals was an impressive feat against an underrated defensive team that will enter tonight’s game with a goals-against average of 2.33, which ranks sixth in the league.

“I think we’ve been very solid in the D-zone,” Penguins defenseman Rob Scuderi said. “We kind of bend-but-don’t-break at times. I think maybe our Achilles heel right now, or things that were trying to work on, is giving up chances on the rush. There’s where we’ve been scored on most of the time. But as far as once we get settled into the D-zone, I think guys have been doing a good job of identifying where they’re supposed to be and executing well and moving the puck out of our zone.”

While the Eastern Conference has more of a run-and-gun stigma than the Western Conference, the swift puck movement through the center of the ice has accelerated over the past five-to-10 years by the removal of the red line and teams’ adjustments to create greater speed in transition, according to Sutter.

“Teams and coaches had to figure out how to get more speed in neutral, now everybody checks so well in neutral and moves the puck so well in neutral that you’re zone-zone, so you go back to that last game, we moved the puck out of the zone well, and we got opportunities, and when we didn’t, they did. It’s not really a deal you want to get into with this team, is where you’re trading Grade-A chances.”

On the other hand, the Kings have been a team that consistently plays to its strengths, and while there has been improved speed and skill in the lineup, there’s still the tendency to play forecheck, cycle, and operate below the dots.

“I don’t think it’s been a benefit to us to get in those [rush] games,” Dustin Brown said. “When we win our games it’s generally because we’re a grinding team. I think the East probably has more of those run and gun line rush teams, but we’ve just got to stick to our game plan, really.”

Dustin Brown, on getting chances off the rush against Pittsburgh:
Sometimes that’s just how the game goes. Depending on who you’re playing and how they’re playing, sometimes you get more rush chances as a result of playing our game in our zone, but every game is different.

Drew Doughty, on the Kings’ rush chances:
I don’t even know how many rush chances we’re getting to be honest, but obviously we want to get more rush chances. I guess traditionally, we kind of develop our chances in the offensive zone, cycling and getting pucks to the net, but I think we have become a better rush team. We’re faster now, obviously Looch came in, Gabby a couple of years ago now, but we’ve gotten a lot faster, and that’s beneficial for us. You see a lot of these teams in the East, that’s where they create all of their chances, on the rush, three-on-two’s, two-on-one’s or whatever it may be, so yeah, we need to get better at that, but at the same time we don’t want to be trading rush chances, especially against a team like Pittsburgh.

Doughty, on how the Kings have balanced size with speed:
I think our team, we’re happy playing the physical, hard, tough game, we have a lot of big guys that want to play physical, and at the same time they can move, but our team, we’re a really sound defensive team, that’s our main focus, we’re not looking to score four or five goals a game, we would like to obviously, but we’re more focused on giving up one or two goals at the most too, and I think we’ve done a good job with that. I’m happy with the way we play, I love playing this system, I think it’s the way to win, it’s the way to win championships, and obviously we have to perfect it to win, but we’re on the right track.

Doughty, on Christian Ehrhoff:
I probably play three or four shifts with him throughout a game. He’s obviously a really skilled defenseman, he sees the game well, he’s done a good job learning our system. At first he wasn’t really used to playing this type of system. He’d been in the East for so long, so he’s really got a lot better at that and he’s playing really good hockey for us right now, and we need him to continue to do that.

Doughty, on the key to getting shots on net:
The league’s really changed, and everyone’s basically shot-blockers. Back in the day, I don’t think shots were blocked even close to as much, now these guys have got all this padding on their skates and whatnot, they’re not afraid to block anything, so it’s a lot more difficult to get shots through, but I don’t know, when I’m out there I’m just trying to get it past the first guy or the guy that’s directly in front of me, after that you really can’t control, you can’t try and get it past three guys. You just really have to try and get it past that first guy, and whatever happens after that, that’s kind of on the forwards.

Doughty, on whether Ehrhoff has helped to fill Slava Voynov’s role:
I don’t know, he a brings a big shot to the power play, which Voynov had, and good vision on the power play, which Voynov had, but I don’t really think they’re two similar players where he could – it’s hard to replace Slava, there’s not too many people in this league that could do it.

Doughty, on what he’s looking for in a pass in a one-time situation:
If it’s a one-time pass obviously you probably want a little bit taken off of it, you don’t a zinger, because it’s a little tougher to one-time a pass that way. If you’re on your strong side, you want that pass to be hard to give yourself more time to create that lane to find the shot to the net.

Doughty, on how he and Muzzin can improve on the power play:
I think before Muzz was more of a shooter and I was more of a passer, and now Muzz has become more of a passer and I’m trying to shoot more, and at the same time, he’s still a really good shooter and I’m still a good passer, so if you have both guys looking to shoot more, that’s a better thing, and Muzz has been giving me more looks, I think I have a few power play goals this year, so that’s more than I had last year. I need to continue getting those shots through and Muzz needs to continue making the plays he’s making. 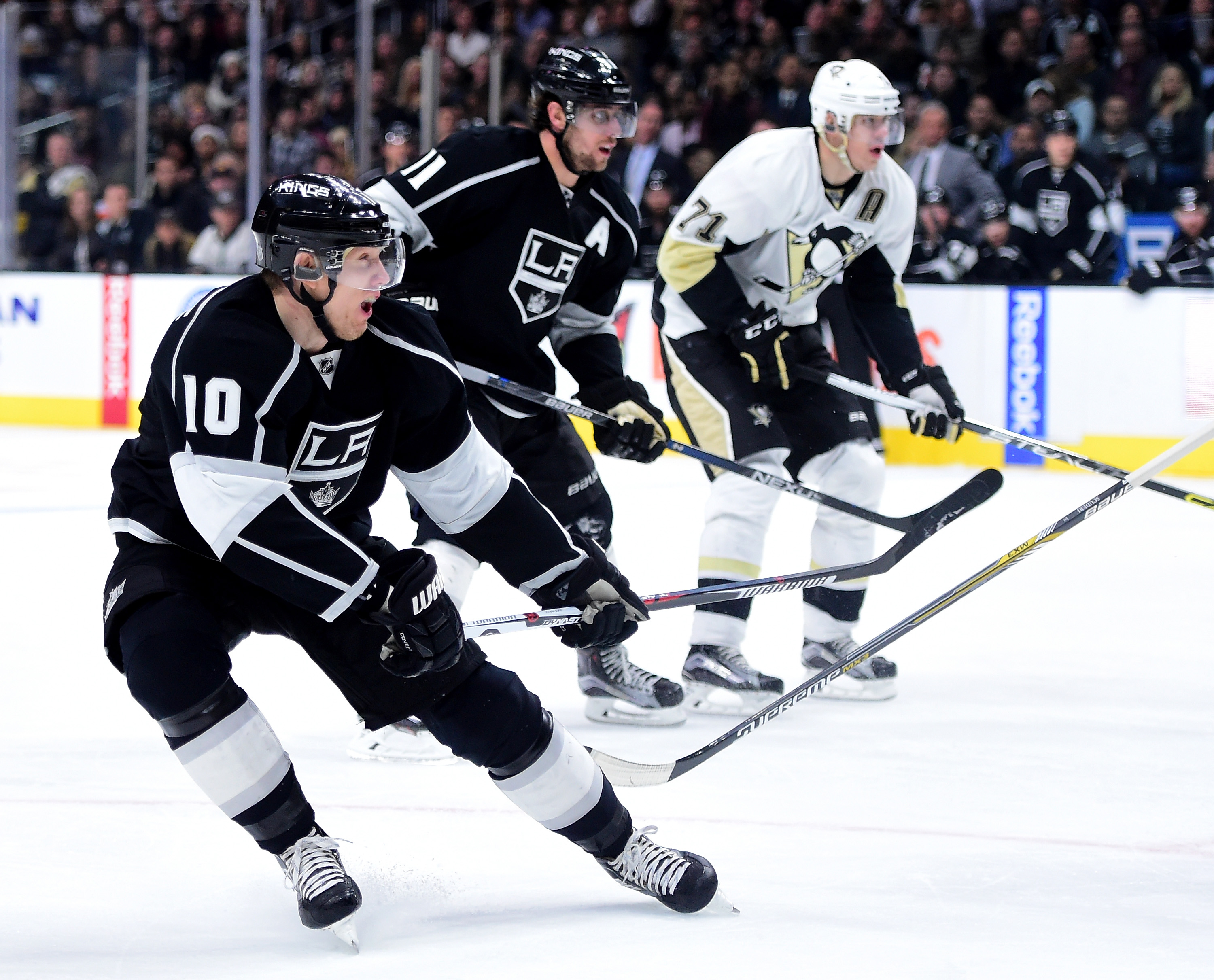