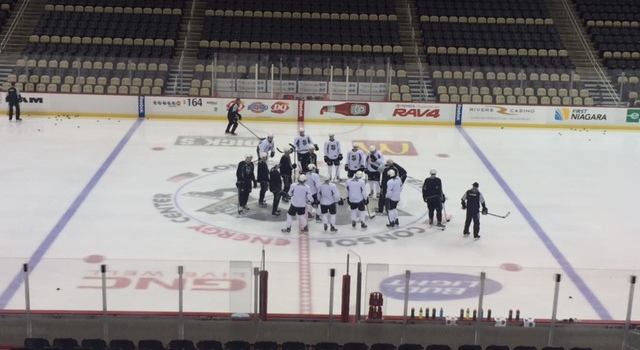 Good afternoon from the team hotel in Pittsburgh, where the Kings have returned for a team meal and nap time in advance of tonight’s game against the Penguins (4:00 p.m. PT / FOX Sports West / KABC 790 / I Heart Radio).

There wasn’t a ton to report from the Kings’ morning skate, which was optional. Expect lines and pairings shown yesterday to hold up: Pearson-Kopitar-Gaborik, Lucic-Carter-Toffoli, Mersch-Shore-Brown, Andreoff-Weal-Nolan; McNabb-Doughty, Muzzin-Martinez, Ehrhoff-McBain. Jonathan Quick left the ice first and will start in net, which was expected as it seemed to be a given that Jhonas Enroth would start against the Sabres, his former team, on tomorrow’s conclusion to the back-to-back set.

The bigger news came from the Penguins’ room. According to Head Coach Mike Johnston and reporters, top defenseman Kris Letang, who didn’t play in Los Angeles last Saturday, suffered an “upper-body” injury during Pittsburgh’s game in Colorado on Wednesday and is out indefinitely. Letang has one goal, 14 points and a minus-14 rating in 25 games this season while averaging a team-best 26:15 of ice time.

I’ll post a story on the Kings’ rush opportunities, which aren’t necessarily a staple of the team’s attack but were there the last time they played Pittsburgh, a club that enters tonight’s game with strong defensive credentials, after today’s Darryl Sutter quotes. Enjoy your Friday, Insiders.