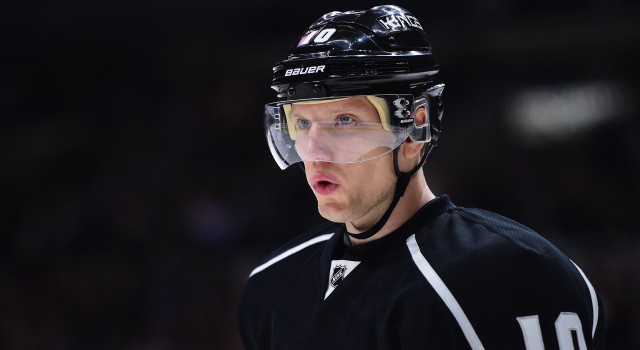 On Friday, Christian Ehrhoff will play in Consol Energy Center for the first time since the 2014-15 season, when he appeared in 49 games for the Penguins and totaled three goals and 14 points before his season was derailed by a pair of concussions. He didn’t appear in the Pittsburgh’s first round defeat to the New York Rangers.

With indications that his comfort in Los Angeles is growing – learned both through his own words and his play on the ice – the 33-year-old has become an important veteran figure on a blue line that is younger than in previous seasons. He has goals in two of the last three games after having scored on Tuesday in Columbus and against Pittsburgh the previous Saturday.

“The last little while has been a lot better,” he said. “I didn’t have a good start to the season. I think I’ve played better and am getting more comfortable, and especially the D-zone stuff that has been a big change for me has come along, I think. I just have to keep going and get consistent with it, and then it’s trending in the right direction.

The change comes from more aggressive play in the defensive zone.

“We try to cut off plays as quickly as possible to not give the other team time to cycle or spend time in the D-zone,” he said. “Before for me, it was more staying on the D-side and cutting off certain areas in the D-zone, but here it’s a lot more aggressive, and being on the guy right away and trying to cut off any time and space. That has been definitely an adjustment for me.”

Ehrhoff will face a former team on consecutive nights when the Kings travel to face the Buffalo Sabres on Saturday.

Christian Ehrhoff, on returning to Pittsburgh:
It’s always special to come back to a place where you lived, and my youngest daughter was born here, so Pittsburgh will always be a special place for our family. Like you said, I was only here one year, and last year I had a tough, tough year with the second half just being injured. But it’s always nice to come back.

Ehrhoff, on a “different” off-season:
It definitely was different. The off-season was different. It took me a lot longer to get into shape. Usually you take off three weeks after a season and it gets fairly quick, you’re catching up, you’re getting back into shape. But I was basically hurt since the end of January, and then coming back in the off-season, working my way back felt a lot harder this summer. That was definitely something I hadn’t experienced before.

Ehrhoff, on whether he felt better as the off-season progressed:
Yeah, that’s when I got basically symptom-free, and I came back after. I skated for a few more days and got cleared by the doctors before I went back home to Germany.

Ehrhoff, on whether it was reassuring that there were no effects from Mike Ribeiro’s hit in October:
This season, yeah, it’s definitely worrying at first, but that cleared up pretty quickly towards the end of the night. It was definitely nice to not have something again and to go right back in.