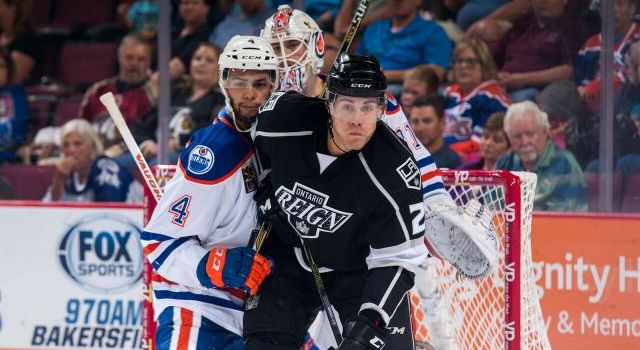 Pittsburgh is a city that Michael Mersch is very happy to be in right now, never mind the additional hours spent in the air and in transit.

After the Ontario Reign’s two-game sweep of the Charlotte Checkers, weather forced the scuttling of the entire team’s travel plans in an attempt to return to the Inland Empire on Sunday morning. Instead of flying through Chicago, Mersch said that he was instead rerouted through Louisville and then to Phoenix, where he endured a lengthy layover.

“I’ve spent a lot of time in the Phoenix airport,” he said.

He’s with the parent club now, though, and close enough to his roots in Chicago that he’ll have plenty of familiar faces in the stands for his expected NHL debut when Kings face the Penguins on Friday – and, of course, having reached a hallmark moment in his life and career, there was some reminiscence.

“It’s my parents taking me to games when I was younger and friends who supported me along the way, my girlfriend as well. It’s exciting,” he said. “Like I said, though, it’s about winning the game and helping whichever way I can.”

In addition to his family’s support, Mersch has also been well supported by Ontario Head Coach Mike Stothers, with whom he has built an excellent rapport, Assistant Coach Chris Hajt and Los Angeles’ developmental staff. The two-way appreciation has been apparent to anyone who followed Manchester’s Calder Cup run last season.

“Well, he’s a great student,” Senior Advisor/Development Coach Mike O’Connell said. “First of all, he’s very attentive and easily grasps what you throw at him and works at it, and his feedback, one way or the other, gives you the positive feedback, negative feedback. He knows his game and what he needs to do, and he’s very helpful to us in that process. Some guys, they’re just not as responsive or it takes a little bit of time, but right off the bat, he’s been right with it all along.”

Mersch’s “game” isn’t fancy. He’s a puck possession forward whose strengths become more clear the closer he is to the opponent’s net.

“I’ve scored a couple shooting goals, but not a lot of shooting goals,” he said. “They’re usually all around the net. The way I put it, the closer you are, the harder it is to miss. That’s kind of my philosophy.”

If there had been a critique of Mersch’s game from his days at the University of Wisconsin through his tutelage in Manchester, Ontario and with the team’s development staff, it has been his skating.

“Yeah, he’d be the first to admit that as well,” O’Connell said.

On the other hand, similar things had previously been written about Tyler Toffoli, and like Toffoli, Mersch has aspects of his skill set and his constitution that off-set those concerns.

“I think it’s just been his anticipation that’s really what makes up for that,” O’Connell said. “He anticipates well where the puck’s going, where it should go, figures that all out, takes shorter routes than everyone else because of his intelligence.”

Those instincts – along with a willingness to battle and get his nose dirty – have influenced Mersch’s Reign-best 12 goals and 93 shots on goal in 2015-16. In 105 career regular season and playoff games in the American Hockey League, the 23-year-old has scored 37 times. On Thursday, he was grouped on a line with Nick Shore and Dustin Brown.

“The ways that he reads the play, he recognizes opportunities and he holds it, doesn’t force it,” O’Connell said. “He’s a real good player. We’re looking forward to seeing him play.”

Mersch, on whether the development staff enhanced his puck protection game:
I think ‘enhance’ is a good word, like you said. It’s always been my game since college on. I think for me to be successful, those are the things I’ve got to do, is puck protection and be around the net in the offensive zone and even puck protection on the walls in the defensive zone. Like you said, ‘enhance’ – they give you a lot of give tips and keep on working with you. It’s a long process if you think back to when I was first drafted, there are a lot of guys in the development staff and coaches in Ontario who put a lot of work in to help me get here, so I’m really thankful for them. I try to thank as many people as I can – you always leave somebody out – but back to the original question, puck protection enhanced is probably the right way to put it.

Mersch, on whether he expected to be called up 20 months after signing an entry-level contract:
You hope it’s as fast as it can be. You just keep working hard and playing games and working hard in practice no matter if it’s here or in Ontario. Wherever it is, you try to stay the course. It’s a long season. Just doing little things and staying the course no matter where you are.

Mersch, on whether he’s “running on adrenaline”:
Yeah, I guess. You try to get as much rest as you can, but it’s kind of tough. [Reporter: It’s good they’re not playing tonight.] Yeah, for sure. I guess now that you said it, it’s a little nicer where I was able to get a practice in and kind of got my feet under me a little bit.