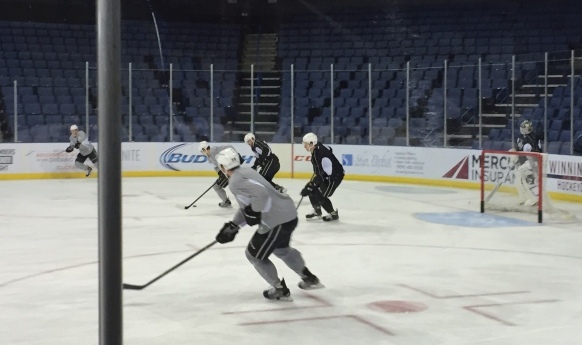 –As far as Wednesday’s practice is concerned, Jonny Brodzinski has moved onto left wing to replace Michael Mersch on the line with center Nic Dowd and right wing Justin Auger. Mersch was of course called up to the Kings officially on Wednesday. Brodzinski has now gone from going scoreless in his first 17 games, to being a healthy scratch last Saturday for the first time, to scoring his first pro goal last Sunday, to finding a spot on one of the Reign’s top two lines. Brodzinski talked about his first pro goal after practice: “Just relieved,” he said. “It’s been crazy how many opportunities you get and nothing goes in. Finally the one slides in, so hopefully they keep pouring in.” Brodzinski, a fifth round pick by the Kings in 2013, has 1 goal, 2 assists, 26 SOG and is a plus-1 in 18 games this season.

–Stothers hinted at a major line change coming possibly this weekend, but wouldn’t bend on any details.

–Goalie Michael Houser, who was recalled last Friday from the ECHL’s Manchester Monarchs when the Reign released Ray Emery from his pro tryout agreement, has been enjoying his new surroundings. “Just trying to get back into the swing of things pretty quick. Obviously glad to be back. It’s where I want to be this year,” Houser said. “I know all the guys already from training camp so it’s not too big of an adjustment coming back up, just the speed of practices and stuff like that but that should be coming in the next couple of days.” Houser did play in the exhibition portion of the season with the Reign, but was sent to Manchester, where he went 8-3 with a 2.63 GAA and .913 SV %. “It was a good start. We were winning, which is most important. Other than that, I was playing well personally I think. I was winning the games that I was starting and worked hard,” Houser said. Houser is obviously yet to make his Reign debut, he had just two chances last weekend, but Peter Budaj owns the rights to the crease for now. “Obviously Buds is playing great,” Houser said. “As long as the team is winning, that’s what’s most important. I’m just making sure once I get in there that I’ll be ready for it.” Stothers is not sure when that time will come, but the hope is that Houser will be able to “fine-tune his game,” under the tutelage of Kings goaltender development coach Dusty Imoo and also learn from Budaj. “We feel good with Houser here as a complement to Buds,” Stothers said. “I’m not sure how it’s going to play out as far as actually playing, but the quality time that Houser’s gonna get with practice and seeing different shooters … we feel like there’s a big upside and in time his time will come.”

–During the conversation with Stothers about Houser, it was also brought up how difficult it was to let Emery go. “There’s so many positives to this job, telling Ray that we were going in a different direction wasn’t one of them,” Stothers said. Emery was seldom used, going 1-1-1 behind Budaj. Stothers said Emery knew the expectation would be that he would be out once Patrik Bartosak made his return from injury, but Bartosak’s legal troubles and subsequent suspension changed Emery’s timetable in Ontario. “It’s hard for the organization to justify two 33-year-old goalies in a developmental league. Right now you’ve got to be developing a young guy of some sort. Houser’s 23, so he’s 10 years younger than Ray. It was hard. He was a good guy, a great guy. He fit in well with his teammates and he treated everybody well and worked hard. I can only hope that something’s working out for him.”

–Forward Joel Lowry, who was sent down to Manchester last Friday, has returned to the team. He played three games last weekend for the Monarchs, who went 2-1 against the Reading Royals. In those games Lowry finished with 1 assist, 3 SOG, minus-1 and 2 PIM.

–The Reign had a rare day off on Wednesday due to some small travel issues on their way back from Charlotte. Thursday was a normal, full practice.