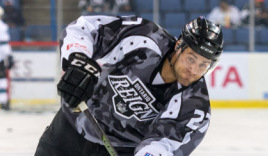 Life without Michael Mersch for now has begun for the Reign. On Thursday, in a far away land called Pittsburgh, Mersch was skating on a practice line with Kings captain Dustin Brown and Nick Shore after his call-up to the big club was made official Wednesday.

It’s the first time a Reign forward has been recalled this season after defenseman Jamie McBain’s early and seemingly permanent call-up. The Kings play at the Penguins on Friday at 4 p.m. PT, where Mersch will be expected to make his NHL debut.

“I wasn’t surprised. I think he’s been quite deserving of a recall,” head coach Mike Stothers said of Mersch after Thursday’s practice. “He had a great start to training camp and the exhibition [for the Kings], he made himself noticeable. And with the start he’s had with us, I think he had 12 goals, I’m extremely excited for him. I think it’s a great opportunity.”

Mersch’s 15 points on the Reign as second only to Sean Backman’s 18. The 23-year-old left winger’s been Ontario’s leading goal scorer for the majority of the season. His 12 goals are still the only time in which a Reign player has eclipsed the double-digit goal mark.

Mersch, a 4th round pick by the Kings in 2011, has been a prime penalty-killer, a do-it-all type of player for the Reign. His 93 shots on goal are far and away the highest on the team. On the other side of special teams, his four power play goals are tied for the team high. While how long he remains with the Kings is yet to be decided, one thing is for certain – Mersch will be missed.

“It’s not going to help us, but that’s not what it’s about. It’s about these guys moving on and getting an opportunity to play in the NHL,” Stothers said. “Everybody’s excited. The whole room is excited for Big Mike. It’s what everybody’s here for.

“It’s tough if you’re the team where nobody gets recalled or nobody gets the chance to get up, it kind of gets demoralizing as the season goes on,” Stothers said.

“I think it’s awesome,” Stothers added. “Last thing I said to Merschy was, ‘I don’t want to see you back. Next time I see you is when I come down and see you at the Staples Center.’”

Positivity within the group of Reign players is important, both from a morale standpoint and an organizational standpoint. Mersch’s departure gives the opportunity for another skater to move into a bigger role (on Wednesday, Jonny Brodzinski was skating with Nic Dowd and Justin Auger) but it also tests a team’s character in more ways than one.

“I’ve been around a long time whether as a player or as a coach and I know there’s been numerous times where guys got called up and there were some pretty disappointed other individuals in the dressing room,” Stothers said. “That just tells you what they were like as a teammate. Told you everything you wanted to know about an individual and their character.

“We don’t have guys like that here. The Kings are pretty good about weeding out guys that aren’t team guys. That’s something we never have to worry about in our locker room. Our guys are fully supportive of the chance that anybody gets up top. Nobody ever looks at as, ‘oh why not me and why him.’ They just look at it as, ‘OK, that means I’m gonna be the next guy.’ That’s what we try to stress here – you want to be the next guy. … That’s the only way you can be. That’s the right way to handle it. That’s the professional way to handle it and it just means you have a good group of people in your room, and I know we do.”

A few Reign players spoke after Thursday’s practice of getting together to watch Mersch play. And while it was perhaps odd to not see Mersch out at practice in a gray jersey (he’ll be wearing No. 49 with the Kings) the change of scenery hits a whole different level with one Reign player: Mersch’s roommate, Kevin Gravel.

“I brought him to the airport at 8 o’clock yesterday morning and then I just kind of stared at the walls for the rest of the day,” Gravel said. “Especially because it was an off-day too, whole lot of not much going on. But it’s good. You’ll take it for that reason … hopefully he doesn’t come back anytime soon.”