Waking up with the Kings: December 9 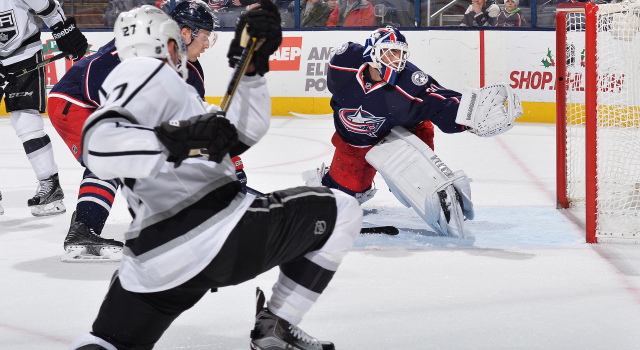 After winning four straight games on the home stand, the Kings might’ve been due for one of those outings in which they were “winning” in every aspect but in the box score. You know those games; you’ve probably sat through some of them at Staples Center. Opposing team scores power play goal, holds on for nail-biting 2-1 win despite handily losing the possession battle. For a team that traveled across the country to complete a three-in-four stretch against a heavy, workmanlike team like Columbus, it wouldn’t have been the most farfetched start to a long road trip. But Los Angeles eventually broke through, using an excellent David Savard assist on Christian Ehrhoff’s laser beam to get on the scoreboard and continued to pound away and dominate possession and zone time before an excellent Sergei Bobrovsky left the game late in the third period due to an apparent injury. With Jonathan Quick pulled, Milan Lucic used a nice touch to shovel a loose puck to Jeff Carter, who got just enough on it to slide it past Curtis McElhinney to tie the game. In overtime, well, the Kings are now 5-0. I can’t really explain what Ryan Johansen was doing on the final shift of the game, other than skating in wide loops, but the center-turned-wing-for-now who was the Blue Jackets’ best forward for the first 60 minutes turned Dustin Brown into Pavel Datsyuk and afforded the Kings ample amounts of time and space to complete a tic-tac-toe game-winner finished off by Alec Martinez. That final play was the icing on the cake for John Tortorella, who after the dust settled made it clear that he was unhappy with his team’s performance in a game in which Los Angeles accumulated 84 total shot attempts, their most since totaling 87 attempts in a win over Calgary on February 12, 2015.

The Kings are finding different ways to win at this point of the season, and after a challenging home stand that included wins over the defending champions, a key divisional rival and two Eastern Conference powers, iced 11 forwards and seven defensemen and had to play catch-up for a shade over 36 minutes. They still banked two points, even though Derek Forbort logged only 5:24 and Jordan Weal 6:42, leading to more heavy work undertaken by Anze Kopitar (at least 23 minutes in four straight games) and Drew Doughty (at least 30 minutes in four straight games). Though I’ve always been under the impression that Los Angeles will still be looking to add a defenseman to the mix, a committee-led blue line has emerged, with different players offering key contributions on different nights during the streak. Drew Doughty is the Lamborghini they’ll always have in the garage, but on Tuesday, Alec Martinez and Christian Ehrhoff were those who stood out, one game after Brayden McNabb had one of his better games of the season. Ages of the top-four minutes eaters on a team that ranks second in the league with a 2.07 goals-against average: 26 (happy birthday, Drew), 26, 24, 28. All are under contract through at least 2019 aside from the 24-year-old McNabb, who will be a restricted free agent this off-season. That’s a good core.

There’s a good test ahead, and hopefully the hotel pillows were extra comfortable because the team will need good rest before attacking the rest of the 13-day trip. With Kyle Clifford, Trevor Lewis, Dwight King and Matt Greene unavailable, the team is short three important role players and an alternate captain who’ve combined to win eight Stanley Cups, and with rookie Michael Mersch joining the team, Los Angeles’ depth is being tested during a time in which team scoring has been mostly top-heavy. The Kings have found ways to win through this streak, though, and while a team that has won two Cups in four seasons and has built up a nine-point divisional lead doesn’t need “measuring-stick” games, Friday’s rematch against the Penguins will be another test of their resolve as the injuries have piled up.