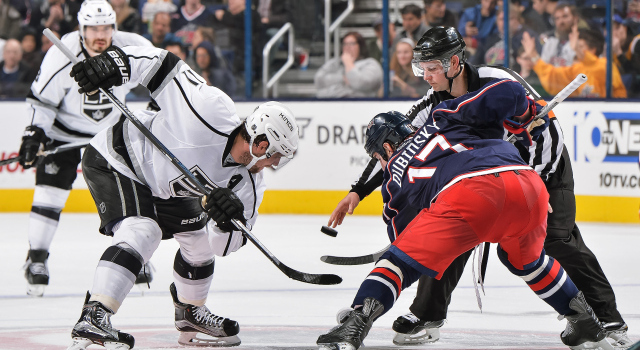 In addition to speaking today about the Kings’ style of play, Anze Kopitar also addressed Tuesday’s come-from-behind win and the themes that arise during a road-heavy portion of the schedule.

Anze Kopitar, on Tuesday’s “character” win:
Definitely I think it’s really safe to say and realistically, we definitely didn’t have our legs the first period, maybe the first half of the game, and then maybe the two goals kind of woke us up. We had quite a bit of shots. We were out-shooting them quite a bit, too, but it still wasn’t the game that we pride ourselves on and we’re looking to play. But after that, you throw everything that you’ve got, and obviously it worked out for us. We realize that’s not going to be the case every night where you don’t have legs and you’re desperate coming into the third period and you just throw everything [at the net]. That’s not the way it works. You’ve got to build your game, and obviously scoring the first goal, we always talk about, but sometimes that’s not going to happen, and I think that’s a really big character win for our hockey club, because in previous years or last year we would’ve just packed it in and maybe just come up a little bit short, and this time around we got it done all the way.

Kopitar, on avoiding excuses:
Yeah, it would’ve been easy just to say, ‘ah, it was the third game in four nights, cross-country flight.’ We had a bunch of excuses laid out for us on the table, but last night, it seems like we weren’t going to take ‘no’ for an answer.

Kopitar, on whether attention is paid to December’s road-heavy schedule:
No, it’s one game. The way the games are spread out now, I mean we’ve got a couple days now and then we play a back-to-back where you look at a little stretch, and then you get another couple days just to unwind and then get fired up again. Even though we do play 10 out of 11 on the road, there are many breaks in there where you can unwind and maybe somewhat forget you’re on the road the whole time. [Reporter: You feel comfortable with the way the team’s playing its road games this season? Maybe different from last year?] Honestly, I don’t remember how we did on the road last year. Obviously, I don’t think our record- [Reporter: Your record was below .500.] Yeah. We don’t play too much attention to that. Just like as you said, it’s one game at a time, and you go and you try to win that game, and that’s what it is. What happened last year or two years ago, I don’t think it makes too much sense to look back. It’s just being in the present and focusing on what you’ve got to do to win games.