Building regularity, and whether LA’s style is “heavy” 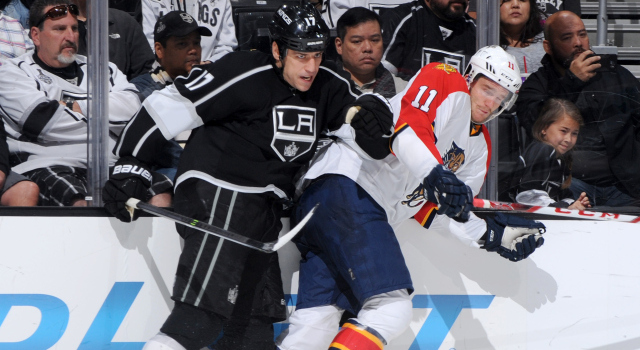 Heavily influenced by a Chicago-Tampa Bay Stanley Cup Final, there was a notion heading into this season that speed and skill would lead to championships in the “new NHL.”

Who knows – that may still be the case. We’re not even into the “16” part of 2015-16, let alone influenced by any playoff data. But, what have we learned about the makeup of successful structure in a league in which the Kings have developed an outside reputation as being one of the league’s “heavier” teams?

“Goaltending, defense, down the middle of the ice,” Darryl Sutter said. Yeah, it’s a benefit to be able to rely on Jonathan Quick, Drew Doughty, Anze Kopitar and Jeff Carter.

“So, are we still learning that? We’re learning lots about it because behind Kopi and Jeff there’s still lots of ups and downs in the middle of our ice,” he continued.

Despite any ebbs and flows in contributions, the Kings are leading the Pacific Division by nine points and continue to draw respect from opposing dressing rooms on their style of play.

Said Tyler Johnson (after a Kings win on December 6): “LA’s a great hockey club. They play the right way, they’re very smart, they’re very structured, they get that goal on us, and they’re a tough team to come back on.”

Said Sidney Crosby (after a Kings win on December 5): “You expect good starts here from them. You expect them to be physical. I thought it just took us a while to get our feet under us and to really get that compete mentality that you need against a physical team like this and winning battles, that kind of thing.”

Said Brad Richardson (after a Kings loss on November 10): “I played with them for five years and it’s just a heavy game. It’s all below the dots, working and they played it to a tee and we let them play that way at first and they took it to us, and we had a little bit of composure and started making the plays.”

Said Gerard Gallant (after a Kings win on November 7): “To me, that’s the team that you’ve seen win two Stanley Cups in the last four or five years. They’re a hell of a team and they battled hard. They play a man’s game. We’ve still got some kids in there and we talked about it.”

“They play a simple game,” he said. “Physical, get the pucks in deep, forecheck, bang our defensemen, and throw some pucks in the net and put bodies on the net. There’s no secret recipe there.”

No, there aren’t many surprises, and if you ask players on the Kings, they’ll often tell you that’s it’s a taxing style of play during an 82-game season.

“We’ve said that before where it’s close to impossible of maintaining the style of play that we do for 82 games,” said Anze Kopitar, who also noted that the team rejected the built-in excuses after having traveled practically entirely across the country to complete a three-games-in-four-nights swing. They did that by playing the same way they’ve played, over and over, it seems, this season.

“We realize usually there’s 10 games in the season where you’re just not feeling good, and I think that was the one last night,” Kopitar said. “I also think a situation like that, good teams find a way, and we did last night. We scored late, and obviously Hoff’s goal was a big one just to bring us closer, and then pretty much pressing the third period and really, I think, not get discouraged and keep on going, and eventually we got there.”

How is it that teams are able to establish a regularity that may come more difficult for other teams?

“Over the years. Every season,” Darryl Sutter said. “There’s a continuity in there, what they believe is going to work. I said that lots last year, too. We’re going to play the same way.”

Interestingly, Sutter rejected the idea that the Kings are a “heavy” team, or a team that has any advantage in physicality over another team, never mind what his players have said or the quotes emerging from opposing dressing rooms.

“It’s not a hard style to play. It’s the same style that every team plays,” he said. “Everybody wants to be consistent with it. There was a time three or four years ago that this was looked at as a big, physical team. This is not a big, physical team. We do it every night. Everybody’s just as big and physical as we are. In fact, most teams are bigger now, right through the lineup. We’re a faster team, which means that you can play a little different style. So, we’ve adjusted to that.”