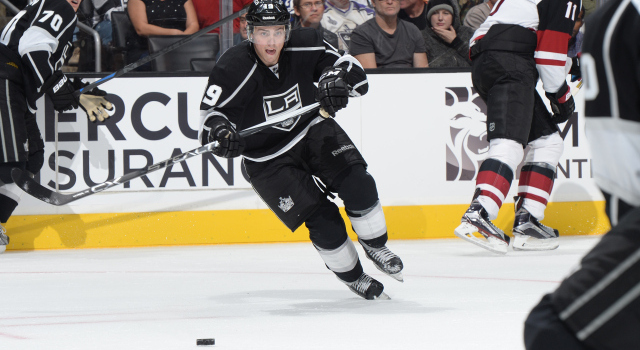 With Trevor Lewis sidelined with an upper-body injury sustained last week in practice, Jordan Weal is receiving the type of opportunity, in limited minutes, that hadn’t consistently been there for him earlier this season.

As Darryl Sutter has reminded reporters, the National Hockey League is not a developmental hockey league, and whether Weal shows improvement isn’t necessarily as important as whether the Kings collect two points when he plays. But Weal has dressed in consecutive games for the first time this season, and Los Angeles has won both games. With Lewis not yet having rejoined the team, Weal is set to play his third consecutive game when the Kings visit the Blue Jackets tonight, and Sutter’s expectations of the 23-year-old are the same as they would be for any of the 20 players who’ll dress.

“Play like he can play in the National Hockey League,” he said. “You can’t make mistakes, you can’t put yourself in a position to assist on another team’s goal, play hard, play to your strengths.”

For a player who is averaging just over seven and a half minutes per game as a King but totaled 135 goals and 385 points over four-plus seasons with the Western Hockey League’s Regina Pats and experienced tangible growth throughout his 221-game AHL tenure, the rhythm of playing in just five of the team’s first 26 games isn’t as unfamiliar as would be expected.

“It’s a little different, but my first year in Manch was very similar to this,” he said. “It’s just a matter of keeping your head down, working hard, and trying to improve a little every game you get in, trying to improve every shift, just getting used to feeling guys on your back, making plays in the offensive zone. It’s a process, so hopefully by the end of the season, I can be at the top of my game and ready to go for the playoffs.”

On the surface, it actually appears to be a similar type of situation to the one endured by Andy Andreoff, who appeared in only 18 games last season but has shown growth while drawing into 24 of the team’s first 26 games in 2015-16. Their styles are completely different – Weal has been a skilled creator and distributor, while Andreoff is known more for his tenacity and energy – though Andreoff would likely attest to a rhythm being cultivated by regular usage, as has occurred this season.

“Yeah, it’s what it’s all about, kind of getting into a rhythm,” Weal said. “You get a game under your belt, and you can take the things that you need to improve on from that game and carry them into the next. I think getting a couple games in with the same line, you can kind of get some chemistry. I think that was evident in the last game. As a line we were creating some good chances, and we were being really efficient in our own end, and we just have to keep building on it and keep playing our game.”

Jordan Weal, on facing former Manchester teammate Andrew Bodnarchuk tonight:
Yeah, I saw that he got the call-up, it’s overdue for that guy, he’s a really good defenseman, he’s one of the hardest working guys I’ve got to play with in my career, it should be a good battle when we get out there, it should be a lot of fun.

Weal, on whether he felt a rhythm was taking roots over the weekend:
Oh for sure, yeah, and I think Cliffy and Noley, they’re starting to find their games this part of the season, and if we can keep it going, keep it rolling, then we can get ourselves a little more ice time, a couple more shifts and try and contribute a little bit offensively, because when your fourth line can come out there and get a goal here or there, it’s a big lift for a team, especially in a tight game.

Weal, on the Columbus Blue Jackets:
Since their tough start, they’ve been playing some really good hockey. They’re a really hard working team, they’ve got some really solid wingers. It’s line one-through-four, so it’s going to be a challenge for us, but I think if we play our game and work like we know we can work, we’re going to give ourselves a good chance.