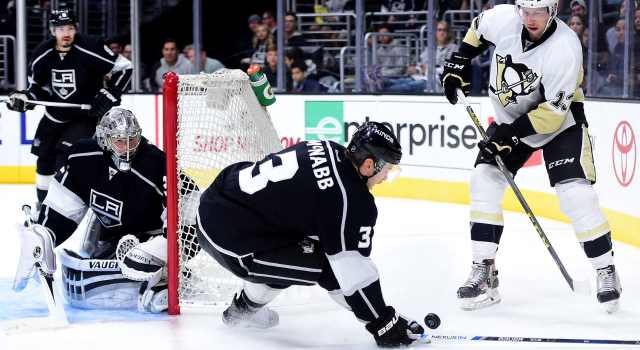 Brayden McNabb earned the game’s first star when Los Angeles defeated Tampa Bay 3-1 Sunday night at Staples Center, and apart from recording the game-winning goal and issuing a heavy hit on Tyler Johnson, also graded well in possession events by leading the team with a plus-eight in on-ice Fenwick differential.

With that said, possession metrics aren’t as useful in a one-game evaluation. For a gauge on where McNabb’s game is at, and what he liked about the team’s performance while claiming all four games in the most recent home stand, I spoke with him after the team’s morning skate.

Brayden McNabb, on the defensive performance during the home stand:
It was real solid, all six of us, and the twelve forwards. We played as five, and whenever we play as five, it usually ends with good results.

McNabb, on what was working well in his game Sunday night:
Everyone knows Drew. When you play with him, you’ve got to raise your level close to his level, so it’s been good so far. We’re making good reads off of each other and we’ve got to continue to do it on this road trip.

McNabb, on how his play with the puck has developed:
I’m more comfortable with it. I’ve always kind of been a good puck moving defenseman, so as you get more experience, you’re going to get better, so I have to continue to do that.

McNabb, on facing Columbus to finish off three games in four nights:
Last time we played them, they’re a big, heavy team, and they kind of pushed us around a little bit, so we have to be ready for that. We’ve got to bring the compete. They’re a hard working team. It’s three in four, but that doesn’t really matter right now, we’ve got to go play a hard competing game.

McNabb, on league parity:
Yeah, there’s not a bad team in this league. It’s a hard league. You can’t take nights off, and when you do you lose, so it’s all about preparation for everyone in here, and if we’re well prepared, chances are we’re going to get a win.