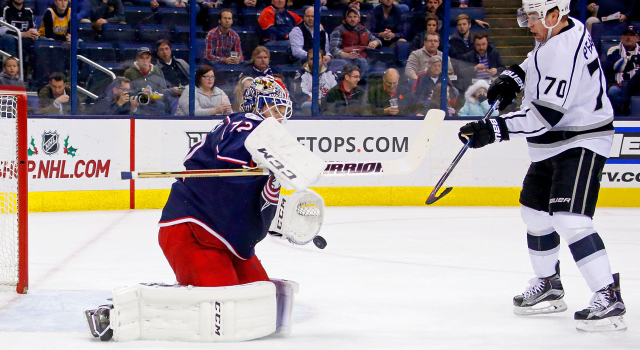 On a “character” win:
I didn’t think we should’ve been down two-nothing, so obviously the Ehrhoff goal late in the second cut it in half. We played well enough to be leading after one and leading after two, and we could’ve still won it in regulation.

On what he liked about the Kings game, even when they trailed:
Well, you’re not going to have a lot of energy. It’s three-in-four. We were trying to play a really fundamental, basic game. What were the aspects I liked? Well, obviously…if you have the puck all game, you should feel good about it.

On learning from overtime:
I don’t think tonight was our advantage to go to overtime with the three-in-four. If you look at it, Shoresy and Brownie probably haven’t had, what, one or two shifts in the overtimes yet, and they’re the guys who went out and scored the goal. I don’t think we’re learning from it. I think that we trust the rules that we have and the guys that try and score. [Reporter: Dustin showed incredible patience. He just held and held and held.] Well, Johansen lost coverage. Any time you lose coverage, it’s going to open something up.

On whether the team plays a “basic, fundamental game” every game:
No, I think we played different tonight than we did the last couple games, that’s for sure, and obviously against a team that probably doesn’t have as much individual skill as the last two teams we played. But you have to play a keep-the-puck game as much as you can, or get the puck back, so that’s what good teams do. We’re not blessed with a lot of scoring, so if you’re going to try and go up and down the ice and outscore somebody, you’re probably going to get beat.

On Drew Doughty and Anze Kopitar’s heavy minutes:
That’s about right for overtimes. Those guys are going to start overtimes, and that means they’re going to get three shifts in overtime, so that right there, if it goes almost the distance, is almost three minutes. That puts Kopi in the low-20’s and that puts Drew usually then in the high-20’s. … Gotta watch Drew’s minutes. He’s getting older now.