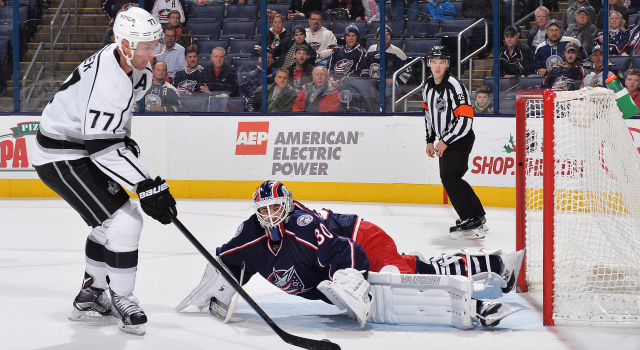 Jeff Carter, on his game-tying goal:
I mean Looch was right in front, Kopi was on the wall and I knew Marty had it at the point. He got blocked a couple times and he was just trying to get it through. So I just kind of slid into some open space and Looch made a great play of getting the rebound and sliding it right over to me. I didn’t get a lot on it because it was in a weird place.

Carter, on whether the win is more satisfying in Columbus:
It’s been long enough. I’m past all of that. [Reporter: I know you are.] Yeah, I’m not worried about that. A big goal and a big character win for our team. It’s a long trip and we went into the game kind of as the mindset of a one-game road trip. We’ve got a couple days off. It took us a little bit to get our legs going I think. Once we did, established our game and I thought we played pretty well.

Carter, on whether it’s better to focus on each game instead of the whole road trip:
It’s a long road trip. We had tonight and then we have two days off. So it’s probably the right way to approach it with a three-in-four and a long flight yesterday. So you approach it as one game. Get in, get you work and then we’ll rest up and get ready to go for the rest.

Alec Martinez, on celebrating by chest-bumping Milan Lucic:
Yeah, the chest-bump has been very well received I would say. I don’t know. I don’ really know how it started. I think Looch and I just looked at each other and I think it started in Philly, on the road. It just seemed right at the time, so two chest-bumps for two points. So I think the fans have really loved it. I’ve seen them tweeting at me the little .GIFs of it and all that little video. I don’t think it’s stopping anytime soon. It’s just a testament to Looch and it’s just a microcosm of how much we benefited as a team with his addition and his energy that he brings. I mean both on and off the ice, he’s been unbelievable.

Martinez, on whether the game demonstrated the team trusting their play when behind:
I think it’s just partially staying with it. This group has been, for the most part, together for a long time and I think we’ve had our share of one-goal games and we feel comfortable playing in them. But that said, I think even tonight – in the past five to 10 games – I think we’re making it a lot more difficult on ourselves than we have to. I think, myself included, I had a good opportunity in the third and I think we just have to do a better job of capitalizing on chances. But again, that said, if we weren’t getting them I’d be concerned but we’re getting the chances. We just have to bury a little bit more. But again, I guess it’s both sides of the coin, a good character win staying with it.