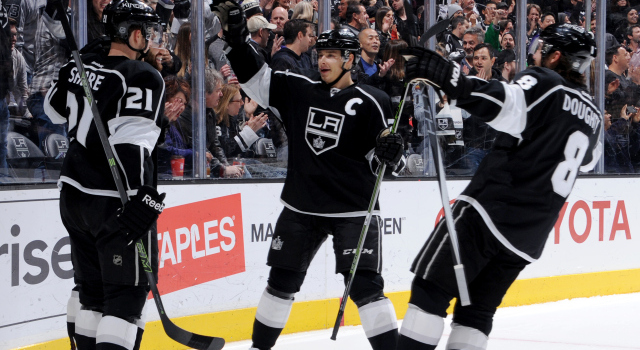 The Kings, who swept a four-game home stand against Chicago, Vancouver, Pittsburgh and Tampa Bay, have used a 5-0-1 stretch to open up a seven-point lead in the division and have distanced themselves from a glut of teams fighting for footing in the lukewarm Pacific. Last place Calgary, which “boasts” a league-worst minus-29 goal differential, is only five points off a playoff spot with a game in hand on third place Arizona, while Vancouver, which is tied for a league-low nine wins, is ahead of two teams and only one point out of a berth. As for Los Angeles, the current points haul is impressive considering it followed the debacle in Carolina, which prompted a leadership committee gathering to ensure that a two-game skid didn’t deteriorate into something that lingered.

The Kings got there on Sunday because Jonathan Quick was stellar in net, they scored timely goals to establish a two-goal lead and killed off all six Lightning power plays. Tampa Bay has dealt with injuries to forwards early this season and hasn’t operated its man advantage at a high level yet, but to keep players like Steven Stamkos, Tyler Johnson, Valtteri Filppula, Nikita Kucherov and Victor Hedman off the scoreboard over nine total power plays in the two-game season series is worth acknowledging. The Lightning managed only one shot on goal during 70 seconds of disjointed five-on-three time – that the ice was affected by a concert, two hockey games and a basketball game over the weekend didn’t exactly help Stamkos or Kucherov fire off pristine opportunities – and while they weren’t an opportunistic bunch on Sunday, were able to generate quality opportunities while trailing by two that Quick ably kept in front of the goal line. It’s easier to play with the lead than it is to fight from behind, and Brayden McNabb’s and Milan Lucic’s goals in the three minutes and 20 seconds that followed Brian Boyle’s equalizer served as pillars in the victory.

It wasn’t necessarily a disruption of a three-on-one overtime rush, but Drew Doughty dove and successfully blocked a Tyler Johnson centering attempt while defending a two-on-one during his second shift of the game. Here’s a litmus test to gauge whether people are staying up to watch Kings games from the east coast: If a writer lists early season awards projections and doesn’t include Doughty as a potential Norris finalist, they’re not watching. Having fine-tuned so many aspects of his game with and without the puck over recent seasons, Doughty has also refined his leadership credentials as part of a world-class package, and those I’ve spoken with in the front office are pleased with the strides he has made in furthering his leadership traits this season. He logged over 30 minutes on back-to-back days and continues to be, along with Duncan Keith, among the most premier defenseman in controlling the pace of a game from the back end. Doughty led Los Angeles with 4:45 of shorthanded time on ice even though he was in the box for one of Tampa Bay’s six power plays. His partner, Brayden McNabb, earned the game’s first star with a plus-three performance in which he potted the game-winning goal.