Waking up with the Kings: December 6 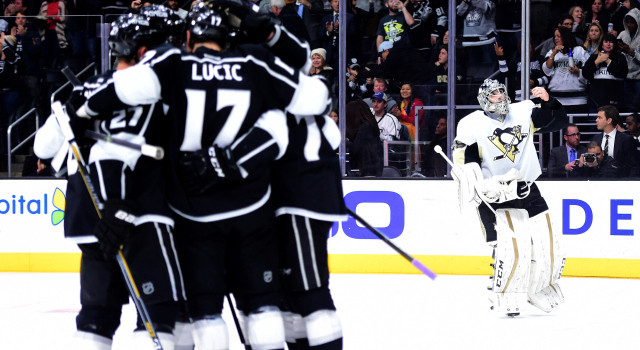 Those who’ve read Kings satire blog The Royal Half are probably familiar with The Moulson Index, a recurring segment created by Kings Men Podcast host Jesse Cohen in which an opposing player who has previously spent time in the Los Angeles organization is highlighted with a fatalistic expectation that “he who got away” will be the player to score/inflict pain on his prior team. It is, after all, named after Matt Moulson. Yesterday saw the evolution of The Moulson Index to The Muzzin Index as players with ties to both the Kings and Penguins only served L.A. during a 5-3 victory in which former King Rob Scuderi took two penalties (one of which was converted into the Kings’ first goal) and was a minus one, and former Penguin Christian Ehrhoff used a great stick to cause a Phil Kessel turnover, leading a Marian Gaborik rush in the opposite direction that culminated in Ehrhoff’s first goal as a King. And let’s not forget Muzzin, a 2007 Pittsburgh draft pick, who tied a career-high with three points and recorded a key block on the play that set up Milan Lucic’s two-on-one goal. For the Moulson Index, Saturday’s game was basically what happens when Linguo suffers a bad grammar overload when trying to correct the mobsters’ syntax in Run, Lisa, Run. There was just too much overwhelming and conflicting data to process, causing the program to break down and explode. The result was an atypical game with eight goals and a high percentage of shots that were good opportunities between a pair of teams that had entered the day with outstanding defensive credentials.

Perhaps the Penguins’ first day game of the season caused a disruption in the visitors’ rhythm and led to a slow start; sure, that’s the narrative. Whatever took place in the first 30 minutes of the game favored the home team. Though the teams were scoreless after one, Los Angeles had the better start and led 2-0 on the scoreboard and 19-4 on the shot counter with 12:49 to play in the second period. Over the remainder of the game, though, the play was more even, and both teams were able to get very good looks at net. Don’t be put off by Jonathan Quick’s three goals against on 20 shots; Pittsburgh was dangerous over the second half of the game, and many of their offensive zone touches resulted in quality opportunities that Quick either made sprawling stops on (I’m looking at you, David Perron) or were shot wide of the net (you, too, Phil Kessel). And that Sidney Crosby redirection – wow, what a gorgeous play! – went bar-down after Crosby made the touch at an angle that saw his back turned slightly towards the goal. Anyway, none of that goal was on Quick, who saw fewer shots but a higher percentage of quality looks. Hockey supersite War-on-Ice.com gave the Kings a 23-18 advantage in total scoring chances and 8-7 in high-danger chances. One high-danger chance came on Muzzin’s goal, in which Anze Kopitar maintained possession against three Penguins – including Evgeni Malkin – to allow Dustin Brown to dig a puck free and find the defenseman activating towards the left circle.

While the day will be known for three goals scored by defensemen (four, if we’re counting Olli Maatta cutting through the slot for a backhanded chip shot), Kings defensemen created offense by making plays in their defensive zone (as referenced above, the Ehrhoff and Muzzin disruptions directly spawned rushes that led to quick strikes). There were also several hiccups and one or two missed contains, as will happen when playing 60 minutes against a team that has Crosby, Kessel, Malkin and company; Muzzin was on the ice for six of the eight goals scored – including two of the Penguins’ three goals. Overall, though, the Kings continued their upward trajectory in the Pacific Division with wins in 16 of 22 games and were able to pocket two points on a day in which the Sharks and Canucks both lost in regulation. There are ebbs and flows throughout all seasons, but right now they’re playing winning hockey.