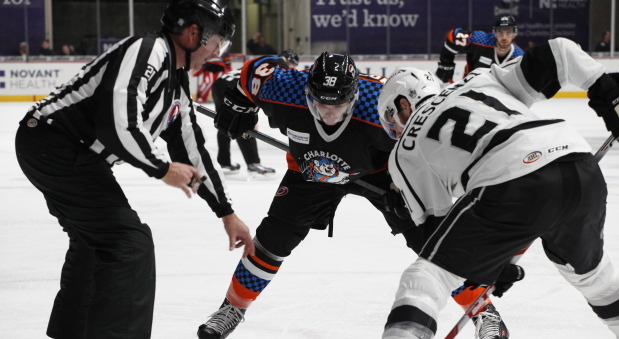 Reign game breakdown
The Reign completed a sweep of the Charlotte Checkers in a 5-1 victory that was a balanced display of offense. Nic Dowd, Sean Backman, Jonny Brodzinski, Ryan Horvat and LoVerde were all scorers for Ontario, which improved to 13-4-2. For Brodzinski, it was his first pro goal. The Reign weathered a competitive first period with Dowd scoring late and after the Checkers tied it at 1 early in the second period, Ontario then rattled off four unanswered goals.

Three stars
–Jonny Brodzinski – The rookie forward was scratched for the first time all season a day ago and perhaps used that as some motivation to get his first goal of his pro career. The St. Cloud State alum scored on the rebound of his own wraparound attempt with 5:08 left in the second period to put Ontario up 3-1.
–Peter Budaj – Getting the start in net for the second straight night was no problem for the veteran netminder as he stopped 33 of 34 shots he faced. Budaj improved on his league-leading goals against average (1.56) and save percentage (.938) and is now 12-3-1 on the season.
–Nic Dowd – Dowd’s late goal with 3:13 left in the first period came on a great individual play as he skated in on the left side and made a move to beat Checkers goalie Rasmus Tirronen over his glove. It came in a mostly-even first where the Checkers actually outshot the Reign 15-9. The goal was Dowd’s second this year and first since Oct. 30 against San Antonio.

Turning point
–Ryan Horvat’s unassisted tally at 2:23 of the third nearly came shorthanded, but certainly put the dagger in the Checkers’ hopes of getting back in the game. Horvat collected the puck in front of his own bench after a mishandle by Charlotte and came down the ice 2 on 1 with Kris Newbury, who had just exited the box. Horvat opted to keep the puck and buried it from the right circle for his third goal this season.

Stat fact
–8 – Goals in two games for the Reign in Charlotte after winning 3-1 on Saturday night. Prior to this weekend the Reign had scored five times in their last three games, two of those contests being losses to the San Diego Gulls.

This and that off-ice
Forward Valentin Zykov was scratched for the first time this season in favor of Brodzinski.

Next up
The Reign won’t play again until next Saturday at 6 p.m. when they host the Bakersfield Condors. They’ll wear special gold and purple jerseys to celebrate their affiliate with the Kings.