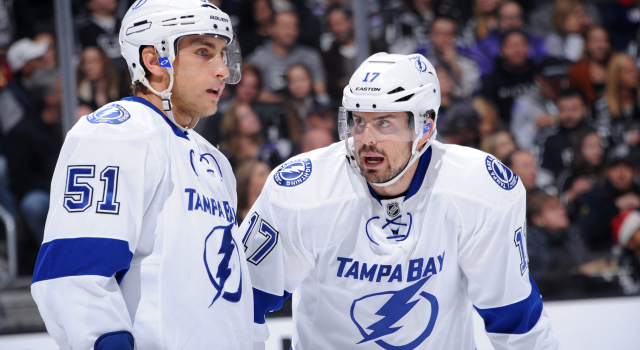 Jon Cooper, on whether he considers Tampa Bay’s road trip to be a success:
If we had lost the first game and then won the next two, you may not be asking that question. I’d say this is a successful trip. What makes it a little tough is that we had an opportunity to get six of six and we only got four of six, but you look back and you see you have a long road trip like this out west and we won two games, so we’ve got to be pleased with that.

Jon Cooper, on pulling Andrei Vasilevskiy:
The change was for a spark, and we just tied it up and then it went it. That’s a coaches feel, Vas has been so good for us; believe me, that kid’s going to play again, he’s going to play a lot, but we were just looking for that spark, and unfortunately, they got the next one and we didn’t, and I thought Bish played really well in the time that he was in, but we were just kind of looking for that spark, and it didn’t happen.

Steven Stamkos, on Tampa Bay’s power play:
Execution, I mean that’s it. I don’t know how you fix it, but that’s the word – execution.

Tyler Johnson, on whether he’s disappointed in his team’s effort:
I thought we had some chances. LA’s a great hockey club. They play the right way, they’re very smart, they’re very structured, they get that goal on us, and they’re a tough team to come back on. We were able to get that next goal to tie it and then they get that quick one right after that, so that’s just kind of how the game went. I felt like we definitely could have done a lot better, the power play especially was pretty atrocious, there’s definitely room for improvement there.

Ben Bishop, on whether he considers Tampa Bay’s road trip to be a success:
Oh absolutely, this is a tough road trip, and to get four points, two wins out of three games, that’s a successful road trip out here. I thought we played actually pretty well tonight, Quick made some big saves, otherwise we easily could’ve been 3-3, we could’ve had the lead there, but he played well and I thought we had our chances.