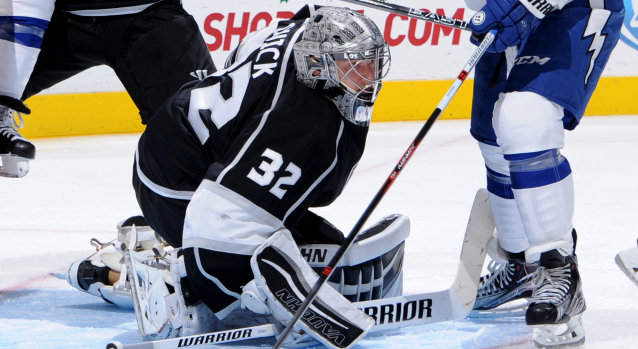 Jonathan Quick, on what he liked about Sunday night’s win:
Finished our homestand up. We had four games before a long trip, and we got quality points. That’s something that we weren’t maybe doing early on in the season. We’re getting better at home and we’re finding ways to win games in different kinds of ways. They’re a great team, Tampa, so to be able to get three out of the four points against them over the season series, that’s good.

Quick, on the team’s 17 wins in the last 23 games:
No, we’re just working. We’re working on our game, we’re trying to get better every game. Obviously there’s some that I thought we could’ve played better and we left a few points on the board there. Obviously to get 17 of 23 – I didn’t know that stat – that’s good. We need to stay on par with that type of winning percentage if we expect to be a playoff team.

Quick, on his rhythm in starting on back-to-back days:
It felt good. The schedule, we don’t get to make it. Whatever it is, you just deal with it and you try to bring your best every night.

Anze Kopitar, on losing his stick while earning his 400th career assist:
I think I kicked the puck back off the draw. I knew it wasn’t going to make it all the way, so then I tried to poke it, lost my stick in the process, and then I think it was the momentum of my stick that kind of push the puck. That’s a first one for me. [Reporter: 400 assists, they come in all ways, shapes and forms.] I don’t think I’ve had one quite like this before.

Kopitar, on the milestone puck:
I don’t think anybody picked up the puck for me, but it’s usually the goals that you save the pucks. [They’re] just laying around somewhere in the house, so that’s about it.

Kopitar, on wanting to improve at home after beginning the home stand 7-5 at Staples Center:
I mean, even the 7-5, we dug ourselves a hole right at the start when we went – what was, it, 0-3? – and have played a lot better since, obviously. I think what we wanted to accomplish is teams coming into our building knowing it was going to be a hard game, and I think we’ve done that pretty well this homestand, and we’ve got to continue doing that.

Kopitar, whether anything changes with 10 of the next 11 games taking place on the road:
It’s not going to change a whole lot. We all know what we’ve got to do on the road to be successful, and obviously on the road you don’t get the last change and the match-up that you want, but it’s the onus on the guys to go out there and compete as you can, obviously, and outplay the guy across from you.

Kopitar, on what the team improved during the home stand:
I don’t think there’s one thing you can really pinpoint to, it’s just going out, competing and playing for each other. Good support, and just try to hold on to the puck and make plays.