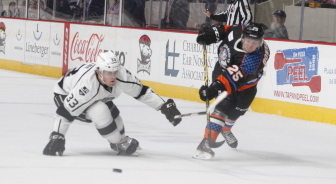 After every Reign away game we’ll try to catch up with Reign head coach Mike Stothers to get his take on things. Here’s what he had to say after Sunday’s 5-1 offensive outburst that gave the Reign the sweep in Charlotte.

Reign 5, Checkers 1
The Reign had five different goal scorers and weathered a tough first period before running away from the Checkers. Rookie Jonny Brodzinski scored his first goal of the season and goalie Peter Budaj picked up his 12th win stopping 33 shots. Nic Dowd, Sean Backman and Vincent LoVerde all scored for Ontario.

Question: What was it like on the bench after Jonny scored?
Stothers: The whole bench was so happy for him. Everybody hooting and hollering and banging the boards. Typical of this group as they are so supportive of each other.

Question: How do you think this weekend went in terms of getting back to playing and skating the way you want them to?
Stothers: We started a little slow for my liking even after talking about expecting a better push from them. As the game wore on and certainly from the second period we raised the tempo. We have the puck more often and spend longer periods of time in the OZ which is far less taxing especially in back to back games.

Question: Eight goals in two games. All from different guys. How impressed are you with that and how does it affect the confidence of the group?
Stothers: It’s what we needed as we had only scored 5 goals in the 3 previous contests. Anytime you can spread the wealth around, and have a big production weekend with all three guys on the “so called 4th” line scoring it energizes the whole team. We didn’t have to rely on any one line nor did we have to rely on our PP to determine the outcome. Feel-good weekend for a deserving collection of athletes.