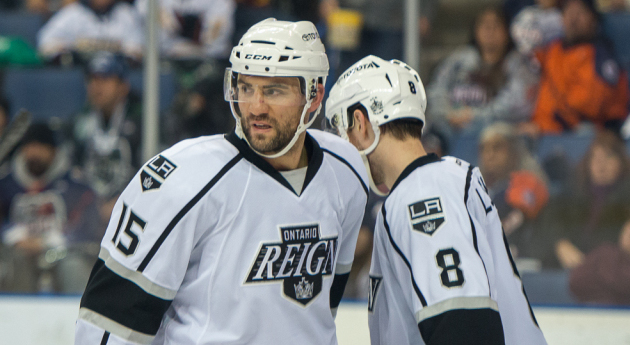 Reign game breakdown
The Reign snapped their two-game losing skid in a 3-1 road victory against the Charlotte Checkers on Saturday night. Scott Sabourin was credited with the game-winner and Paul Bissonnette and Michael Mersch also scored, to help the Reign improve to 12-4-2-0. Ontario overwhelmed Charlotte in a lopsided 43-19 shot difference, providing an easier night for goalie Peter Budaj.

Three stars
–Kevin Gravel – The Reign defenseman had two assists on the night, none more savvy than the heads up stretch pass from the defensive zone that sent Sabourin on his way for the eventual game-winner. It was Gravel’s first multi-point game of the season.
–Paul Bissonnette – The winger picked up his second goal of the season in his second game back from a back injury on a second attempt of his own shot at 11:24 of the second period to put the Reign up 1-0. Although the veteran has been limited to just seven games this season, he continues to be an impact player when he is healthy, also dropping the gloves for the second game in a row.
–Scott Sabourin – Just a game ago, Sabourin was flying all over the ice while providing a tough, physical presence against the San Diego Gulls. In this game, Sabourin showed he can score, too. His goal at the 17:45 mark of the second period counted as the game-winner, a wrist shot from the right circle for his third of the season.

Turning point
–Michael Mersch’s wraparound goal with 11:05 left in regulation gave the Reign a 3-1 cushion during a third period in which the Checkers were continually pressing to tie the score. Head coach Mike Stothers wanted Mersch and Justin Auger to use their size in their first time playing together this season. They did just that to set up Mersch’s team-leading 12th goal of the season, causing a bit of havoc behind the net for Charlotte defenseman Trevor Carrick to release Mersch free for the goal.

This and that off-ice
Away from Charlotte, forward Joel Lowry, who was sent down to the Manchester Monarchs on Friday, went pointless in a 3-0 loss to the Reading Royals. Reign forward Jonny Brodzinski was scratched for the first time this season.

Next up
The Reign and Checkers will face off again at 2 p.m. PT on Saturday.