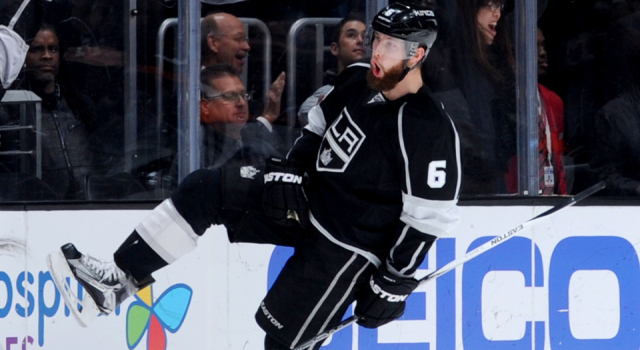 Milan Lucic, on a “different” type of win:
I don’t know. I think we’ve had three afternoon games, and we seem to get some goals in the afternoon games. Definitely the D-men stepped up and scored some big ones for us today, and they were involved all night. We had our opportunities and made the most of them, especially [when] we got that first one, then we kept it going. When they make it three-one, we answered right away. After they made it four-three, I thought we were able to tighten it up again in the D-zone and get the win.

Lucic, on Drew Doughty’s impact:
He’s one of the best D-men in the world for a reason. I think we’re all lucky to have him as teammates. He scores a big goal on the power play to get us going here tonight, and he scores a big power play goal last game as well to get us back in it. He’s a big time player and came up big for us today again. [Reporter: You played your whole career in the east. Do you think people even out east realize how good he is?] He would definitely get more exposure if he was in the Eastern Time Zone. [Reporter: You know what I mean, right?] I know exectly what you’re saying. But he definitely has one of the best resumes out there. He could easily be a Norris Trophy winner right now if he wasn’t playing at 10:30 at night most nights in the Eastern Time Zone. Two gold medals, two Stanley Cups for a reason, and he’s a big part of all four championships, and again, he’s a great player, and I thought he definitely stepped up tonight and got us a big win.

Jake Muzzin, on whether he’s happy with the team’s direction:
Yeah. I think we gave up a little too much tonight. Even though the shots may not have been lots, they had a lot of Grade-A chances, I think. But, we ended up scoring one more goal than them, and that’s what we needed. Every game is different. There are going to be different scores, obviously, different ways of winning, and as long as we keep finding ways to win, that’s what we’ve got to do.

Muzzin, on getting three goals from the defense:
Yeah, it was a good night for us. It’s always nice when we can pop in and contribute offensively, give a break to the forwards for a game.

Muzzin, on whether the defensive corps beyond Doughty is overlooked:
Everyone’s playing well. I think maybe the personnel is a little different or not as highly touted as everyone may think, but I think the way we play and the way our character back there and our mindset going into games is the same, and that’s to defend hard and move pucks quickly and get it into our forwards’ hands to get it out of the zone. I think we’ve been doing a great job moving pucks and defending, and Quickie’s been awesome in the net. We’ve just got to continue doing that, yeah.

Muzzin, on an assertion that he’s a “pillar” of the defense along with Doughty, and whether it means a lot to him:
Yeah, it does. Coming in, a younger guy, and a couple years now here, so growing as a player and on and off-the-ice and taking on new roles and stuff like that is exciting, and me and Dewey are having fun, and we’re looking forward to the future. [Reporter: You guys are like grizzled veterans now.] [Reporter: You’ve got a grizzly beard.] It’s Christmastime, so a little. [Reporter: Part-time job as Santa?] I might go to the mall and take pictures.