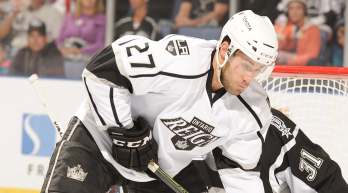 After every Reign away game we’ll try to catch up with Reign head coach Mike Stothers to get his take on things. Here’s what he had to say after Saturday’s dominating 3-1 win in Charlotte that got the team back in the win column.

Reign 3, Checkers 1
Kevin Gravel had two assists for his first multi-point game of the season and Scott Sabourin was credited with the game-winner in a dominating effort where Ontario had a 43-19 shot advantage. Michael Mersch’s wraparound in the third period provided the 3-1 gap, his team-leading 12th tally of the season.

Question: Was that the kind of grind-them-down type game you were looking for?
Stothers: We were much better in all areas of the ice. We skated well, and were on top of their players, and the puck, which makes it tough for them to gain ice. We supported each other well tonight and were able to utilize the entire bench. They played hard and physical we will be challenged again tomorrow.

Question: How pleased were you to see the scoring spread out a bit, and also Gravel having a big night?
Stothers: We got an insurance goal from Mersch on a great wraparound. Not many go to the net with the puck better than Big Mike. A strong FC (forecheck) led to Biss scoring the first one and Sabby got his on a quick transition. We played the right way and the guys deserved the result. Gravel chipped in with two helpers and was as solid and reliable as always. It was a great team effort.

Question: Is this the best win of the season then? A complete game. And for tomorrow are you inclined to start Houser?
Stothers: No, no and nope. The win was good don’t get me wrong but we have played better. They (Charlotte) will be ready to go again tomorrow, and we will have to respond to the expected challenge with an even better effort. Budaj will go back between the pipes again. He played well and the schedule has not been too demanding. Houser will get his starts in time.