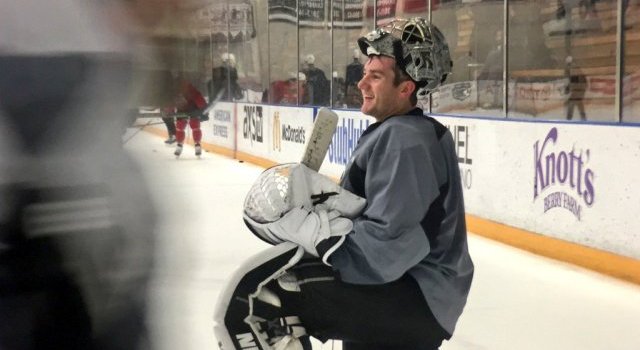 Good afternoon from overcast El Segundo. The Kings practiced at 10:00 a.m. earlier today, and while I missed the early portion of the skate because of a doctor’s appointment, there were several developments learned through Darryl Sutter and those in attendance:

-Trevor Lewis left practice early because he was “dinged up a little bit.” Because the ding happened so close to when Sutter addressed the media, there’s no firm prognosis on the severity of the injury, or whether he’ll be available Saturday afternoon against the Penguins. “See how the day goes,” Sutter added. When Lewis left practice, Jordan Weal skated with Dustin Brown and Nick Shore. When Weal has been in the lineup, he was most often slotted as the center of the fourth line, with Andy Andreoff jumping up as a wing alongside Brown and Shore. It’s unclear whether that alignment will be utilized against Pittsburgh, and with no morning skate tomorrow, we’ll have to “wait for the song” for any potential realignment. The Kopitar, Carter and Andreoff lines did not change at Friday’s practice, nor did defensive pairings. Jonathan Quick appeared to remain on for a touch more work than usual, though he still left the ice well before Jhonas Enroth. Because tomorrow’s game is a matinee, the #LAKingsGoalieTweetOff applies. Expect to see Quick start against the Penguins, with Enroth the most likely goaltender to face Tampa Bay on Sunday.

-Matt Greene is at home resting after surgery on his shoulder earlier today. “Sore. Real sore,” Sutter said. “They had to shave him. He’ll be sore. … They knew exactly the procedure they had to do. It’ll be a while. Long-term.” All the best in your rehabilitation and recovery, Matt.

-Ontario Reign Insider Lindsay Czarnecki penned a very good story on forward prospect Jonny Brodzinski, who has a goal scoring history but is yet to find the back of the net in his nascent professional career. He hasn’t changed his approach, and the coaches and development staff have lauded him for it. Lindsay’s story is right here; keep in mind Michael Mersch, who is one year Brodzinski’s senior, turned pro one year prior and also had been known for his scoring knack. Mersch had three goals to his name on this date last year before finishing with 22 markers (and an additional 13 in the Calder Cup Playoffs).

-More to come later throughout the day, including Sutter quotes, a story on Tyler Toffoli and some Anze Kopitar thoughts on facing the Penguins’ stars. Thank you for reading, Insiders. UPDATE, 12:20: Just realized today is our holiday party! There will be a slight delay in the early afternoon. Getting Sutter’s quotes up right now.