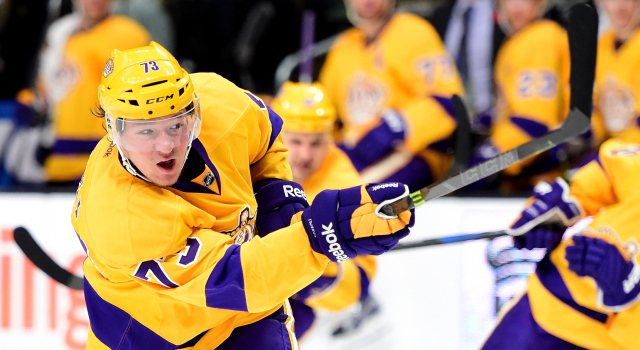 Not even Wayne Gretzky or Mario Lemieux shot over 30% in any NHL season, so Tyler Toffoli’s descent from a 34.6% October shooting rate was among the more inevitable developments during the early stages of this Kings season.

So when Toffoli was robbed on two high-grade scoring chances during the Kings overtime win against Vancouver on Tuesday, that was the sight of regression in motion.

“I think the nice [save] was the one on the power play,” Toffoli said. “It hit his knob, but the [other chance], I think I kind of shot it right in his glove. I thought I had him upstairs, but I didn’t get it up high enough.”

With the 24th game in an 82-game slate checked off the books, Toffoli’s own personal scoresheet reads only two goals in the last 14 games (and 11 goals total, which prorates to 37 over 82 games). Again, luck, for however that abstract concept is weighed, comes and goes. And as for a shooting percentage that has dipped to 17.5%, that’s still six points above his personal best in any of his four NHL seasons, so that “luck” may not immediately rebound. His PDO is still a team-high 104.6. (What is PDO?)

“It sucks, but you’ve just got to keep working and keep working for your opportunities to score goals,” he said. “I haven’t been obviously scoring like I was at the start of the year, but that’s just the way it goes. If I’m getting chances, eventually they’re going to start going in again.”

The chances, according to hockey super-site War-on-Ice, appear to be returning after a slight lull in the middle of November. Toffoli has been credited with two “high danger chances” in each of the last three games, a rise from a 14-game stretch in which he posted zeroes and ones. In terms of regular scoring chances, the 15 he posted over his last three outings equaled the amount recorded over the previous seven games combined.

“He hasn’t played as well lately,” Sutter said. “He’s been talking about it – sort of like with Gabby – skating and those things, getting more good opportunities. He had two great ones last game. He shot right into the glove, one was, I think, he couldn’t get it up. As long as he’s getting good chances [it’s good], and if he’s not, then you’ve got a problem.”

As for any ebb and flow in those chances, Sutter responded concisely.

Tyler Toffoli, on generating scoring chances:
I mean, there were a couple games where I wasn’t my best, but for the most part I feel like I’ve been getting some good opportunities to score or making some good plays, and Looch and Carts are getting good scoring chances as well.

Toffoli, on whether his line has seen any different types of match-ups as of late:
No, I think it’s the same. It’s been the same, and I don’t think it’s really going to change. We roll all four lines, so for the most part we’re playing against all four of their lines. When we’re on the road, it goes both ways. Sometimes we’re going and sometimes Kopi’s going, and we’ll play against their top lines.