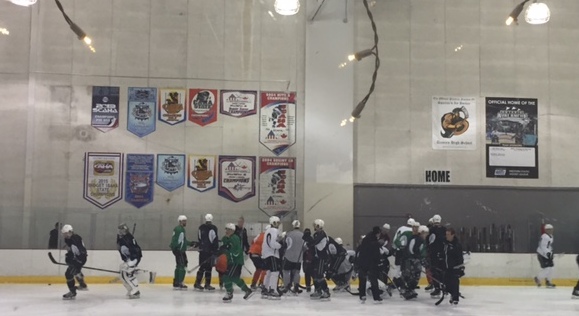 Some tidbits from today’s practice from Center Ice in Ontario as the Reign prep for a Charlotte road trip this weekend.

–When center Kris Newbury (foot) was out of the lineup, the line of Michael Mersch, Nic Dowd, and a right-winger of choice was the de facto No. 1 line for the Reign. Now with Newbury’s return slated for this weekend, the veteran centerman has moved onto his previous line with left wing Adrian Kempe and leading scorer Sean Backman (four goals, 12 assists). “I feel good about it,” Backman said about getting the line back together. “Kris is a great player and he’s been in this league a long time and he brings a lot to the line. He can score, he makes plays, he’s tough, he’s great out there.” Backman later added that, “putting Kemps on the wing where he can use his speed a little more will help us out.” Stothers himself said he has mixed feelings about Kempe moving back to the wing. “He can play anywhere, he skates so well, it shouldn’t really matter,” Stothers said. “I really, really like him as a left winger, I’m just not sold that he shouldn’t, or at some point will become a really good centerman.”

–As another result of Newbury’s return, Justin Auger finds a new home on the Mersch-Dowd line for the first time this season. Now Auger, all 6 feet and seven inches and 229 pounds, will bring some more size and physical presence to the line. “With me and Merschy on the wings there’s a lot of size,” Auger said. “We’re going to be a tough line to handle. We’re going to be a line that’s really going to work them down low and look to pin teams down in their own end.” Auger said it helps that the three are already good friends, so there’s some chemistry that has carried over from when they played together for a bit last season in Manchester. Stothers has continually kept Mersch and Dowd together, as they do play heavy PK minutes as a tandem. The coach illustrated Thursday how difficult a decision it was for him to choose Auger for the spot. “We’ve got a big whiteboard in our office and we move the magnets around and move the names around and we do it constantly and probably overthink it, probably overanalyze it. But again, it was a matter of you’ve got Newbs back and Biss back and Gogol joining us and now you try to move pieces around and you try to give yourself as balanced four lines as possible. So that’s the way it looks as of today. I don’t know how long it will last, that will be up to Mersch, Dowd and Augs.” Regardless of how long the three stay together, Stothers knows what moving a player like Auger can do for the line. “His size and his presence, his reach, his work below the goal line. You look at that,” Stothers said. “Merschy’s a tough guy to play against and Augs is a tough, big body. Hopefully they can wear some teams down in the offensive zone. Get some grind time. You know you’re playing the same team back-to-back. Hopefully we can physically wear them out. He’s got a nice set of hands. We’re hoping that he’ll complement Mershchy and Dowder. And then the good thing is we can put Brodz there, we can put Z there, we can put Kempe there. We’ve got a lot of options being back to full health.” Make note of that remark about Kempe, as Stothers’ tone did change when he made it.

–It’s no secret that the Reign’s power play fell flat in a 0-for-7 performance in their last game, a 3-1 loss to the San Diego Gulls. On Thursday, Backman, who plays on the point during power plays, attributed the miscues to failed execution, poor passing and simply getting outworked. “Inexcusable,” Backman said. With no mid-week game this week, the Reign have been on the practice sheet and have had time to go through video. “I think just going back and looking at our reps we had in the game and fixing things that weren’t quite there. You’re going to have nights where you’re not always clicking like you should be. In that particular game the power play let us down a little bit there. Guys take that personally, especially a guy like myself. We’ll just have to be better on Saturday night.” Stothers said they reviewed all aspects of that game to try to find where things went wrong. “We just didn’t handle the puck clean, we cheated a little bit in finishing our routes on the entries. But a lot of it was just we passed the puck to somebody and it would just explode off their stick. There’s no real explanation for that. It wasn’t something systematically per say, it was just an execution standpoint.” Stothers added when you look back on Saturday’s blunder against the Gulls you have to decide whether it was a bigger issue overall or just one bad night. It could be just one bad night, considering how successful the Reign have been on the man advantage, where they remain third in the AHL at a 23.1 clip. “More of a concern for me is we scored five goals in three games … more of a concern for me is not the power play, it’s 5-on-5. We’ve got to generate some offense there,” Stothers said. “You don’t blame a goalie, you don’t blame your special teams, you don’t blame anything other than we didn’t get it done. I think we’ll be better.”

–It was a spirited practice on Thursday, as it usually is the day before the team goes into game weekend. Friday is a travel day and the Reign will not skate before leaving town for Charlotte, N.C. They’ll face the Charlotte Checkers (11-9-0-0), a team they have yet to face this season. “We’ve got their most recent three games. We’ve been able to look over the team,” Stothers said. “We have an idea of what to expect from them but they’re going to be doing the same thing. They’re going to be looking at our team and breaking it down and trying to figure out ways to beat us, so therefore what they’ve done in a game against San Jose they might change. … We have a basis of what we can build off of. I want us to be more cognizant of what we need to do and I think we got away from it a little bit in San Diego. When we are playing the way we can, which is skating and moving the puck and supporting each other, we’ve got a chance. When we don’t, the results are going to be what they were last weekend.”

–Today was the last day of work for Monarchs defenseman Alex Lintuniemi (upper-body injury) before he rejoins his Manchester teammates this weekend. … Kings development staff members Nelson Emerson and Sean O’Donnell were in attendance to observe the team.