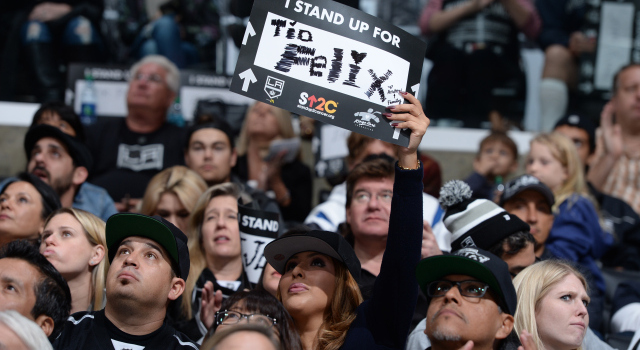 The Los Angeles Kings’ attendance and television ratings have been strong at the outset of the year, according to numbers provided by the team and FOX Sports West.

As for attendance, AEG Sports Chief Operating Officer Kelly Cheeseman confirmed that the team experienced a 95% renewal rate in its season ticket partnerships.

“Anywhere from 90 to 95 [percent] is our goal,” said Cheeseman, who noted that the team experienced renewal rates of 95% and 97% in recent years. According to figures obtained in early November, the team’s total season ticket membership totaled 16,359, with a wait-list of 1,805 people.

The team’s streak of consecutive sellouts is expected to continue throughout the season and into the playoffs, should Los Angeles qualify. Including playoffs, Tuesday’s game against Vancouver was the 175th consecutive sellout, dating back to December 3, 2011. Though games are technically sold out, there are still tickets available on game days through the team’s website.

“We don’t want to just push people out the door and say that we’re sold out every game and you can’t get in,” Cheeseman said. “We will sell out every game, we expect that, but it’s important for us to grow a lifelong database of Kings fans. So we want to make sure that people keep coming back to us as the direct source for tickets.”

Through 23 games, the Kings’ household ratings on FOX Sports West were up 30% compared to the same number of games into the 2014-15 season, and the overnight rating for Los Angeles’ game in Chicago on November 2 was 1.1, the team’s third-highest regular season rating since 2009 and the highest rating for a non-prime time game since 2000, according to FOX Sports West. The ratings for the Kings’ recent game against the Blackhawks at Staples Center were not as high as the ratings for the game at the beginning of the month, according to two people with knowledge of television ratings.

These are interesting figures considering that the Kings failed to make the playoffs in 2014-15 and dealt with three separate off-ice incidents, including an alleged violent altercation between former Los Angeles defenseman Slava Voynov and his wife that resulted in the defenseman’s decision to remove himself from immigration proceedings and self-deport to Russia. Off-ice legal coverage spilled onto pages outside of the sports section, thus affecting a brand that had been strengthened by Stanley Cups in 2012 and 2014.

“Our goal is to stay consistent with our brand and the path that we’ve built for the last five to eight years. So regardless of what happened last year with missing the playoffs or any off-ice issues, we still have a consistent goal with building a family of life-long Kings fans that’s built around a group internally with our players and our staff that’s a part of that family,” said Cheeseman, who noted that community initiatives, such as the team’s Fit to be Kings Runners Club, Lil’ Kings Learn to Play Hockey and the Pedal for Pucks events, as well as team-produced multi-platform content such as the We Are All Kings campaign and this year’s Black and White web video series have helped strengthen the bond between the team and its fans following a challenging 12 months.

As for the strong television ratings, they resonate across FOX’s hockey coverage. Ratings on Prime Ticket’s Anaheim Ducks broadcasts are up as well, according to FOX Sports West. One line of thinking is that both teams have been successful in recent years, leading to greater awareness and a growing scope of hockey throughout the region.

“Anything that we needed to react to off of missing the playoffs wasn’t really on the top of the mind,” Cheeseman said. “We certainly had it in the back of our heads, but we know how good our team is and how our team is built. It wasn’t like it was a complete reload or rebuild. It was rally the organization, the fans around that opportunity of ‘Let’s do this together. Let’s come back together and attack this together.’”

-Through 23 games, Kings household ratings on FSW were up 30% compared to the same number of games into last season.

-Through the first two months of the season, the LA Kings household ratings on FSW are off to the best start since 1999-00.

-The overnight rating for LA-Chicago on November 2 was 1.1, the Kings’ 3rd highest regular season rating since 2009, and the highest rating for a non-prime time game since 2000.